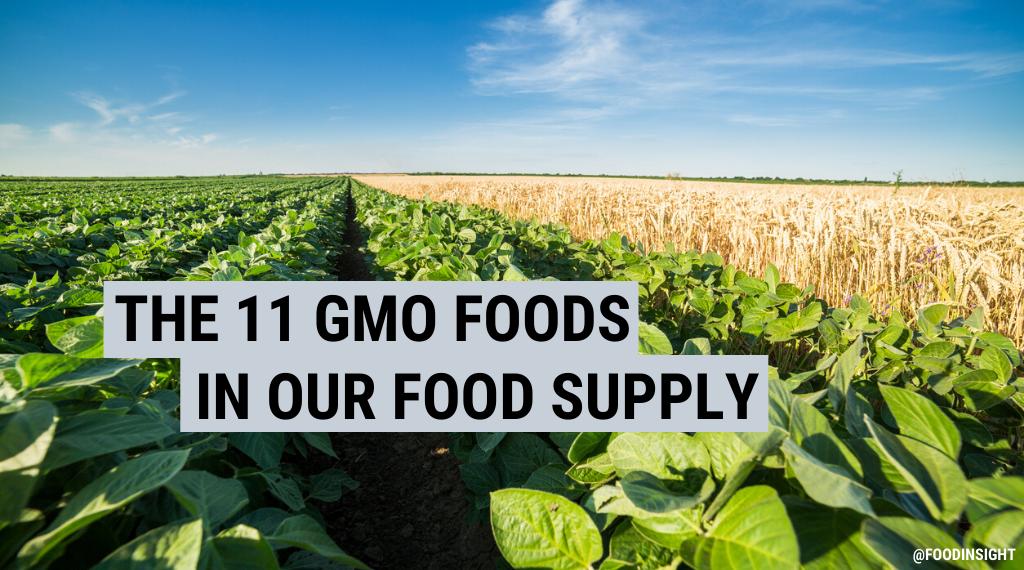 GMO (genetically modified organism) foods are being seen more and more in our food supply and are often cited as the future of our agricultural system. Many GMOs, in fact, are already ingredients in food products that we frequently enjoy. GMO crops are crops that have been safely engineered to have new traits such as increased vitamin availability, drought resistance and pest tolerance. Genetically modified (GM) foods support the food production system by increasing yields, supporting conservation and building sustainability through social, environmental and economic opportunities. Today, let’s take a closer look at the characteristics of the 11 GM foods that have been approved in the U.S.

GM alfalfa, a highly nutritious legume used as cattle and dairy feed, was approved by the U.S. Food and Drug Administration (FDA) in 2006. It is the fourth largest U.S. crop (both in acreage and production). GM alfalfa has been altered to (a) be more resistant to herbicides like glyphosate and/or (b) contain less lignin, making the alfalfa easier to digest by cattle. These modifications limit the overgrowth of weeds, increase alfalfa production, and increase the nutritive value of feed for cows.

Approved by the FDA in 2015, GM apples first appeared on the U.S. market in 2017. We’ve all heard that “an apple a day keeps the doctor away,” and GM apples have been modified to keep browning away by suppressing the oxidase enzyme. These non-browning apples can reduce food waste in the food system, as bruised apples (which may be perfectly fine to eat) may appear brown and distasteful to consumers.

FDA-approved in 1999, the GM canola plant is an oilseed crop whose seeds are used for canola oil (a heart-healthy unsaturated fat), animal feed and biofuel. The canola plant has been modified to increase its resistance to herbicides and produce less phytate (a naturally occurring plant seed anti-nutrient that prevents the body from absorbing vitamins and minerals). Decreased herbicide use translates to improved environmental sustainability, decreased pesticide use and increased desirable yields.

As one of the world’s most important crops, corn is used as food for both humans and animals alike. GM corn (maize) was FDA-approved in 1996 and has been modified for insect resistance, herbicide tolerance, drought tolerance and size enlargement. By increasing its resistance to insects and tolerance to herbicides, GM corn not only resists predation from caterpillars, beetles and other pests; it is also not prone to mold and fungi growth. Ultimately, these improvements lead to increased yields, reduced toxins and decreased environmental impacts from pesticide use.

As a multipurpose fiber, cotton is used in clothing, textiles and animal feed. FDA-approved in 1995, GM cotton accounts for 80 percent of the world’s cotton. Prior to its genetic improvements, cotton crops were environmentally, economically and sanitarily detrimental due to their natural pests (moths, aphids, etc.) and heavy pesticide application. GM cotton is continuously modified for herbicide tolerance and insect resistance in order to decrease herbicide use (thus diminishing environmental impact) and to increase yield. Recently, GM cotton was approved for human consumption as a new high-protein food!

Soybeans are incredibly versatile commodity crops. Soybeans are made into tofu, soy milk and other plant-based protein products. Soybean oil is used for salad dressings and frying. Soy can also be formed into candles and used as biofuel. Mostly, they are used for high-protein animal feed. FDA-approved in 1995, 90 percent of U.S. soybean crops are GM soybeans. These beans were modified for herbicide tolerance and improved oil quality. By changing fatty-acid compounds in soybeans, soybean oil can be stabilized to prevent rancidity (an off-putting flavor resulting from chemical breakdown). Additionally, herbicide tolerance within GM soybeans increases yields and decreases environmental impacts.

Although approved by the FDA in 1995, genetically modified summer squash (yellow squash and green zucchini) is grown at low levels in the U.S. These summer squash are resistant to zucchini yellow mosaic, a virus that disastrously impacts global cucurbits (squash, pumpkins and melons). Unaffected by the virus, GM summer squash reduces resource use and prevents food waste from crop destruction that would result from a viral infestation.

Although salmon is the second-most popular fish consumed in the U.S., overfishing and environmental degradation has dangerously reduced wild salmon populations. Approved in 2015, GM salmon is the first GM animal to be authorized by the FDA. Compared to its non-GM counterparts, GM salmon can grow to full size in half the time. Not only can GM salmon meet the growing demand for fish, it is also environmentally sustainable by conserving wild fish populations, reducing carbon emissions and controlling fish farming inputs and outputs.

Globally, GM crops have been adopted in 67 of the world’s 195 countries. In 2017, 17 million farmers raised GM crops. The most frequently grown global GM crops include corn, cotton, canola, and soybeans. However, other countries also cultivate GM crops such as pineapple and eggplant.

GM crops not only increase our world’s food supply but their ability to increase economic value, conserve biodiversity, decrease carbon emissions and support human health is changing the world one gene at a time. Next time you are sautéing a vegetable or chewing on a French fry, take a moment to reflect on the GMO science behind the food you are eating and the sustainability this innovation provides our food system.

This article contains contributions from Tamika Sims, PhD, and Lily Yang, PhD Postdoctoral Research Associate at Virginia Tech in the Department of Food Science and Technology.

We use cookies to ensure that we give you the best experience on our website. If you continue to use this site we will assume that you are happy with it.OkPrivacy policy