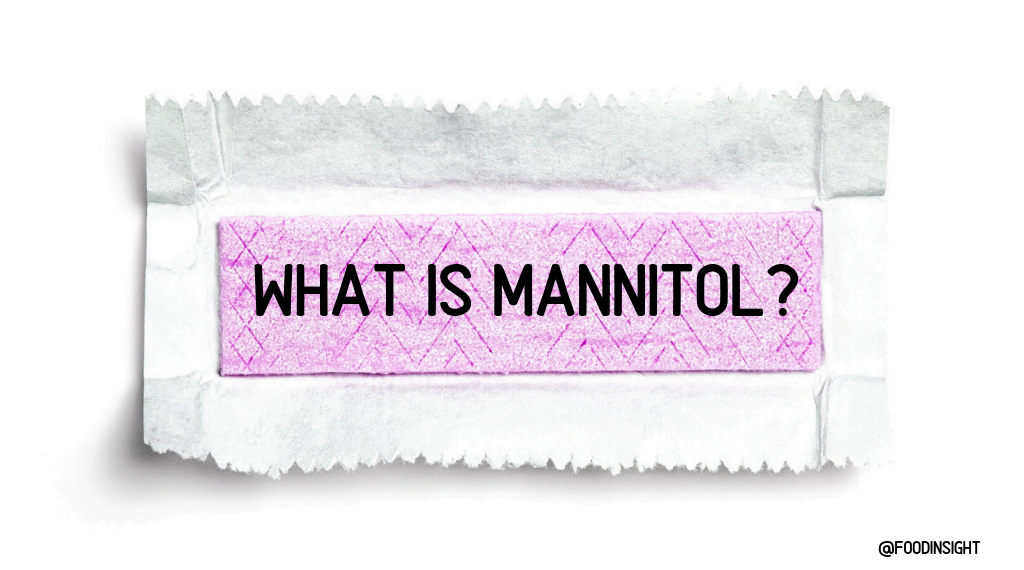 The basics of mannitol

Mannitol (pronounced ma-nuh-tall) is a type of carbohydrate called a sugar alcohol, or polyol, which are water-soluble compounds that occur naturally in many fruits and vegetables. Mannitol is also commercially produced for use in chocolate coatings, confections, chewing gums, powders and tablets to provide body, sweetness, cooling taste and texture. It’s also useful as an anti-caking agent due to its minimal ability to absorb water.

Mannitol’s safety has been reviewed and confirmed by health authorities around the world, including the World Health Organization, the European Union, and the countries Australia, Canada and Japan. The U.S. Food and Drug Administration (FDA) also recognizes mannitol as safe.

While the safety of mannitol (and other sugar alcohols) is well-documented, when eaten in excessive amounts some sugar alcohols (e.g., mannitol and sorbitol) can cause gastrointestinal discomfort, including gas, bloating and diarrhea. As a result, packaged foods that contain mannitol or sorbitol must include a warning on their label about potential laxative effects.

But mannitol’s contributions to health go beyond calories. Two areas in which sugar alcohols are known for their positive effects are oral health and impact on blood sugar.

Sugar alcohols, including mannitol, have been shown to benefit oral health in several ways. Primarily, they are considered “tooth-friendly” because they are noncariogenic: in other words, they don’t contribute to cavity formation. The act of chewing also protects teeth from cavity-causing bacteria by promoting the flow of saliva. The increased saliva and noncariogenic properties (along with sweetness and cool taste) are why sugar alcohols like maltitol, mannitol, sorbitol and xylitol are used in sugar-free chewing gum. Because of these attributes, the FDA recognizes mannitol and other sugar alcohols as beneficial to oral health.

Like other sugar alcohols (with the exception of erythritol), mannitol contains calories in the form of carbohydrate. Mannitol is slowly and incompletely absorbed from our small intestine. The remaining mannitol continues to the large intestine, where its metabolism yields fewer calories. Because of this, mannitol consumption (compared with an equal amount of sugar) reduces insulin secretion, which helps keep blood glucose levels lower as a result.

There is not a minimum requirement for mannitol intake. Having too much may cause gastrointestinal discomfort including bloating, gas and diarrhea. But these effects may not be the same for everyone. Therefore, the FDA requires a label statement regarding potential laxative effects for foods that might result in consuming 20 grams of mannitol in a day.

For those following a low Fermentable Oligosaccharides Disaccharides Monosaccharides And Polyols (FODMAP) diet, food sources of mannitol are monitored because mannitol is a type of polyol.

Sugar alcohols are naturally produced in various plants as a result of photosynthesis. Mannitol is found naturally in fresh mushrooms, algae (especially brown algae) and the bark of the manna ash tree. It’s also found in small quantities in most fruits and vegetables (e.g., celery, olives, onions and pumpkins).

In addition to being found in whole foods, mannitol is commercially produced to help reduce calories from sugars in packaged foods. Its most common application is in chewing gums, both as a sweetener and as a powder to keep pieces of gum from sticking to its wrapping and machinery. Mannitol is also a useful component in chocolate coating for ice cream and sweets due to its high melting point and color retention at high temperatures.

Interested in learning the basics of other food, nutrition and health topics? Check out our “What Is” series.