It seems like everyone is jumping on the “non-GMO” bandwagon these days. But I’d bet a lot of people haven’t stopped to consider that virtually all their favorite “natural” foods are still the result of genetic modification that has been happening for thousands of years. These breeding practices have worked to bring us some delicious and highly nutritious foods by selectively breeding for desirable traits. But where did these foods get their starts? Let’s take a look. 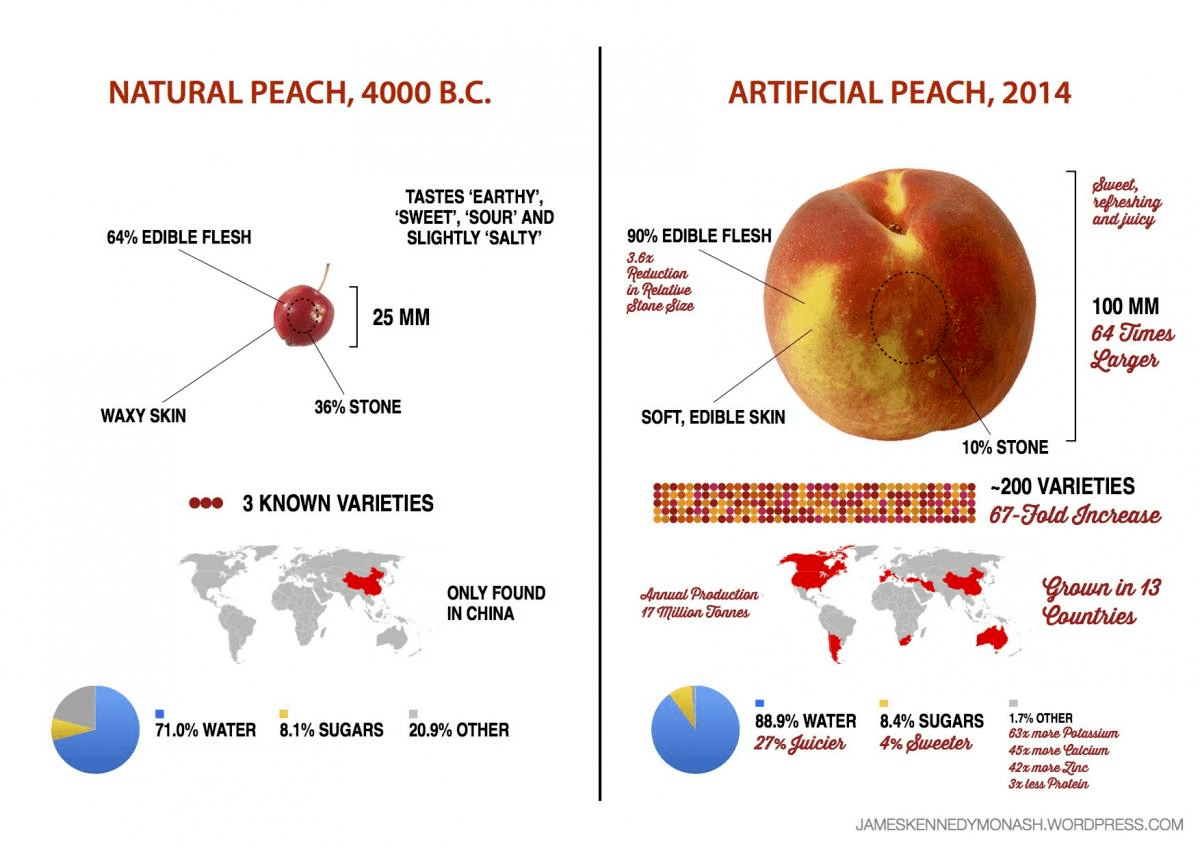 Then: First domesticated in ancient China, peaches used to be about the size of a cherry, with little flesh and a slightly salty taste.

Now: Farmers obviously saw great promise in the peach and had the patience to selectively breed them for thousands of years to get the peach we enjoy today – one that is 64 times larger, 27 percent juicier, and 4 percent sweeter.

Then: Carrots date back to the 10th century and were found in Persia and Asia Minor. Originally thought to be purple or white with a thin, forked root, over time they became a yellow color.

Now: After centuries of domestication, farmers were able to change these thin, white roots into the large, tasty orange roots that grace our vegetable trays today.

Then: Bananas originated in Papua New Guinea, possibly as early as 10,000 years ago. Two varieties make up our modern fruit, both of which that had large, hard seeds.

Now: Today bananas are well-loved for their grab-and-go appeal, or for their ability to be made into banana bread, depending on whom you ask. But this food, with a much better taste and much smaller seeds, has come a long way from its ancestors.

Then: Watermelons probably originated in Africa but thrived in the hotter climates of the Middle East and southern Europe after domestication. Even as late as the 17th century, paintings depicted watermelons with a swirl-shaped flesh full of seeds, far from what we know today.

Now: Eventually traditional breeding won out, and we have the deep pink or red, fleshy watermelons that have long been a staple at summer picnics. Thankfully we can even enjoy them sans seeds.

Then: You might be wondering how these are all related. Each food is a different cultivar of the same species, Brassica oleracea, originally a wild mustard plant that is now often referred to as wild cabbage. Kale, broccoli, and cauliflower have been around for at least 2,000 years, while Brussels sprouts made an appearance in the 1600s.

Then: Almonds used to be bitter, white nuts that could also kill you, as they contained cyanide to discourage pests from eating them.

Now: At some point in history, some almond trees developed a genetic mutation and lacked the gene that told the tree to produce cyanide. Humans domesticated these nuts over time, giving us the healthy almonds we enjoy today.

It took in some cases thousands of years for these foods to develop into what we enjoy today. Luckily we now have technology available that allows us to identify the genes that give us desirable traits, such as being disease- and pest-resistant or producing larger and higher yields. We no longer have to rely on chance to help grow food. And there is a huge need for this technology as we seek solutions to grow enough food in the face of climate change, new diseases, invasive species, and an ever-growing population.