The Basics of MCT Oil 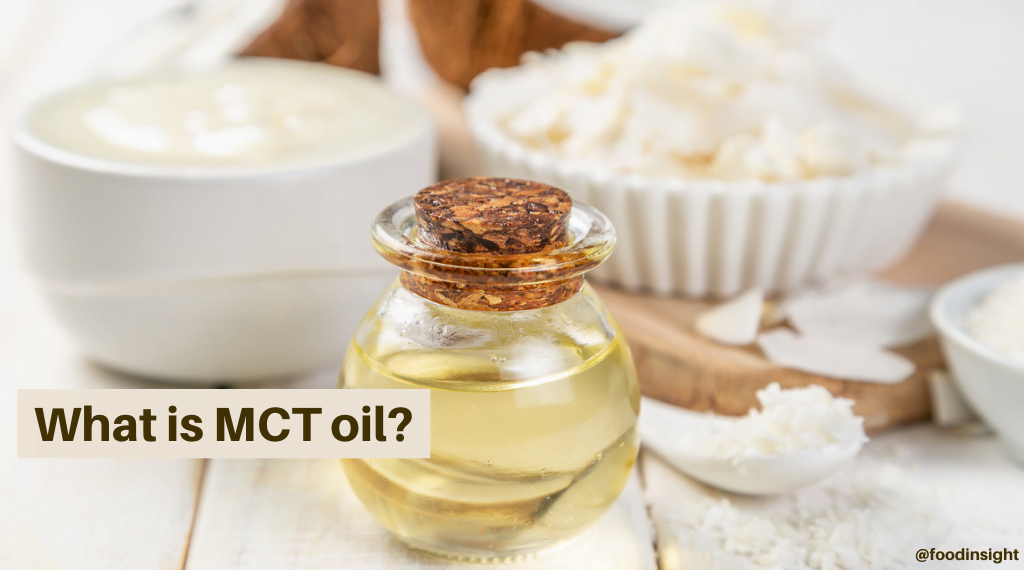 Over the past few decades, popular opinion on dietary fat has shifted considerably, and many have come to better appreciate the health benefits that certain types of fats can provide. We’ve talked about the ins and outs of monounsaturated and polyunsaturated fats—considered “healthy” fats—and cautioned against overconsumption of the trans fatty acids and saturated fats found in red and processed meats.

But recently, one unique product made entirely from saturated fats has been extolled by many for its health benefits: medium-chain triglyceride oil, better known as MCT oil. How does it differ from other types of fats? Does the science live up to the hype? And should you be adding it to your diet? Let’s find out.

What is MCT oil?

Fatty acids mainly consist of carbon and hydrogen atoms linked up in a chain. They come in different lengths that are determined by the number of carbon atoms they contain. Short–chain fatty acids have fewer than 6 carbon atoms, while long chain fatty acids have more than 12 carbons. Medium-chain triglycerides are a type of fatty acid that has between six and 12 carbon atoms. MCTs are found naturally in foods like coconut and palm kernel oils and full-fat dairy products; they’re also found in human breast milk. In contrast with long-chain triglycerides (LCTs), MCTs have a slightly lower number of calories per gram (8.3 vs. 9.2).

MCT oil is derived from processing coconut or palm kernel oils, and it primarily consists of saturated fat. A tablespoon of MCT oil contains 14 grams of fat and 115 calories. It is often colorless, odorless, and flavorless and is a liquid at room temperature, so it can be consumed on its own or mixed into foods and beverages. However, MCT oil has a low smoke point, so it should not be used for cooking. MCT oil can also be found in powder form that can then be mixed with a liquid to make a beverage, in the same way that protein powders are used to make protein shakes.

MCT oil is unique in the way that it’s digested, absorbed and used in the body. Most fatty acids are digested with the help of bile and enzymes from the pancreas. They’re then absorbed from the gastrointestinal tract, making their way into our lymphatic system and then into the bloodstream before finally making it to the liver. This process for MCTs, on the other hand, is much more efficient: They don’t require bile or pancreatic enzymes to be digested and they are transported directly to the liver. Because of differences in the way MCTs are broken down in the body compared with LCTs, they are more likely to be used as an energy source and less likely to be stored as body fat.

Do MCT oils have health benefits?

Because of their ability to serve as an efficient source of energy, they have become popular with athletes and people trying to lose weight. A 2015 systematic review and meta-analysis of 13 randomized controlled trials in healthy adults showed that when compared with LCTs, MCTs reduced body weight, waist and hip circumference, total body fat, total subcutaneous fat and visceral fat. However, although the differences were statistically significant, they were relatively small: For example, people consuming MCTs lost an average of one more pound (compared with those consuming LCTs). Participants were not followed after the studies concluded, so it’s unknown whether or not they were able to maintain any weight loss that was observed. While there have been a few studies on the effects of MCT oil on athletic performance, more research is needed to draw any strong conclusions.

The health effects of MCT oil on cardiovascular disease, diabetes and neurological conditions like Alzheimer’s disease have been studied, but there is no conclusive evidence of a benefit for any of these conditions.

Should I be taking MCT oil?

MCT oil has proven benefits for people with gastrointestinal conditions that impair fat absorption. Beyond this, however, evidence of any health benefit of MCT oil is extremely modest (in the case of weight loss) or extremely weak or nonexistent (in most other health conditions). Therefore, use of MCT oil by most healthy adults is unlikely to have significant health benefits.

If you are still interested in trying MCT oil, it’s important to be mindful of how much you are taking. There are no clear guidelines on recommended daily doses, though consuming more than 4–7 tablespoons per day may result in gastrointestinal distress. Gradually increasing the amount of MCT oil per day and spreading consumption throughout the day may help reduce these effects. MCT oil can be mixed into beverages like smoothies, coffee and tea or stirred into foods like hot cereals and soups. If you plan to start taking MCT oil, it’s important to speak with a healthcare provider about any benefits or negative effects it may provide.