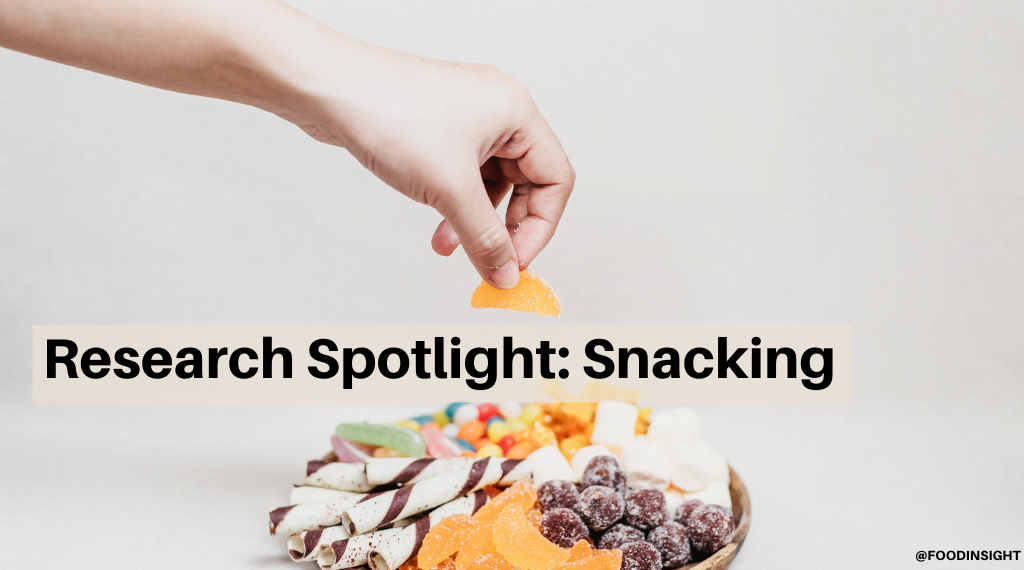 Whether it’s salty or sweet—or, for many, a mix of both!—Americans are no strangers to snacks. But what exactly are Americans’ preferences when it comes to the kinds of snacks they eat, and why do they snack in the first place? IFIC’s 17th annual 2022 Food and Health Survey included questions exploring Americans’ behaviors and perceptions surrounding snacking.

Stress may have played a role. This year’s survey found that 56% of Americans reported being “very” or “somewhat” stressed in the last six months. Those who reported being “very” stressed in the past six months were more likely to say they snacked at least once a day (81% versus 72% of those who were somewhat stressed and 65% of those who were not stressed). The influence of stress on eating-related decisions is notable. Results from the American Psychological Association’s Stress in America 2022: Concerned for the Future, Beset by Inflation survey found that 76% of adults reported that facets of their lives were negatively impacted when stressed, with eating habits being among the top aspects that were impacted.

In addition to those who reported being very stressed, our survey found that Millennials (78% versus 68% of Boomers) and parents of children under age 18 (79% versus 69% of those without children under 18) were more likely to report snacking at least once day. This finding isn’t all too surprising given the frequent juggling of responsibilities that these two demographic groups tend to manage. With navigating work obligations, family responsibilities, and social commitments—not to mention acclimating to the “new normal” following the peak of COVID-19 over the past several years—these groups may have found snacking to be a convenient way to satisfy hunger cues on a busy schedule.

Looking ahead to next year, findings from the 2023 Food and Health Survey will provide key insights into whether snacking frequency continues to increase.

This year’s survey not only shows interesting changes in the frequency of snacking; it also shows shifts in the top reasons for doing so. The top reason for snacking reported this year was being hungry or thirsty (34%), followed by one-quarter of respondents (25%) who said that snacks were a treat for them. Interestingly, when comparing these numbers with the results to the 2021 Food and Health Survey, we see an uptick in the number of Americans who said they snack because they need energy (22% versus 17% in 2021) and because snacking is a habit of theirs (21% versus 17% in 2021).

Diving into the demographics, younger generations were more likely to snack for energy (25% of Gen Z, 30% of Millennials and 24% of Gen X, versus 13% of Boomers). Additionally, parents of children under age 18 were more likely to snack for this reason (26% versus 19% of those without children under 18). Again, the popularity of snacking for energy among those balancing the responsibilities of school, work, life, and family is relatively unsurprising. In fact, this year’s survey found that “energy/less fatigue” was the most sought-after benefit from foods, beverages or nutrients.

Convenience and flavor preferences were also shown to drive snacking. Just over one in five respondents (21%) said that they snack because “snacks are easily available to me/convenient,” followed by 20% who said “I want salty snacks” and 19% who said “I want sweet snacks.” Interestingly, fewer Americans this year attributed their snacking motivation to a preference for sweet snacks (19% versus 25% in the 2021 survey). The drop in the interest for sweet options could possibly be explained by high interest in reducing sugar intake. In our 2021 COVID-19 and Holidays Survey, “eating less sugar” topped the list of food- or beverage-related New Year’s resolutions for 2022 (among those who planned to make a resolution).

Snacking Preferences Throughout the Day

When it comes to which snacks Americans are reaching for, the influence of the time of day is undeniable. The most popular time to snack is in the afternoon, with 71% having at least one snack during this window. When it comes to the start of the day, over half (52%) reported having at least one snack in the morning. Among those who snack during this time, the most popular choice was fruits, with 43% saying so. This was followed by dairy (28%); nutrition bars (27%); Danishes, donuts, or pastries (25%); and savory/salty snacks (25%).

However, snack preferences appeared to become more indulgent as the day went on. Among the 67% who reported snacking in the evening, the most popular option was savory/salty snacks (40%). This was followed by sweeter choices including candy, chocolate, and other treats (38%) as well as cookies, cake, or ice cream (37%). While fruits and dairy products were the most popular choices in the morning, just 33% said they opted for fruit in the evening, with 22% saying the same for dairy.

Whether seeking to improve energy levels or to satisfy hunger cues, it’s safe to say that snacking is becoming increasingly popular among Americans for a variety of reasons. To learn more, check out the 2022 Food and Health Survey here.