The very first time I got a latte, I had no idea what I was ordering. There was just a special on caramel lattes, it sounded good, and so I figured, “Why not?”

Despite the nonchalant order, the first taste began a lifelong affair with this comforting and creamy coffee beverage (as well as spending $20.00 on a steam wand to make them at home). Since then, I have been enjoying various coffee drinks like cappuccinos, macchiatos, and mochas. Of course, not everyone knows the differences between those three drinks. Some people don’t even know what an espresso is (gasp!). But no worries, this little cheat sheet will explain all the ins and outs of coffee-based drinks.

Let’s start with the simplest coffee based drink, espresso. Espresso is just really, really strong coffee. It’s brewed by forcing a small amount of almost boiling water under pressure through finely ground coffee beans. This makes the flavor more concentrated, as well as thicker than a typical cup of coffee. Also, espresso is generally served in a one- or two-ounce shot glass because, per ounce, it has more caffeine that an ounce of regular coffee. 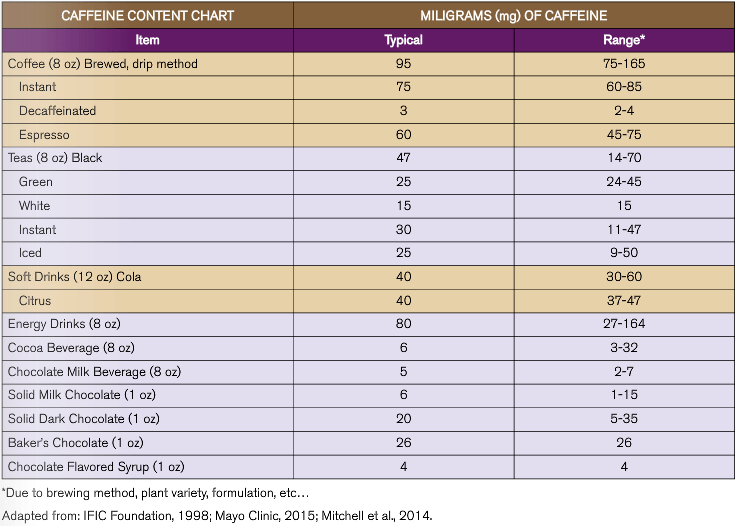 Not only is it a base for many drinks below, but espresso also is used in one of my favorite desserts, tiramisu!

If you want the jolt from an espresso in a regular coffee cup, and don’t want the bitterness, try an Americano. It’s made from diluting an espresso with hot water.

Americanos get there name because this is closer to what Americans drink at home from a coffee machine.

If you drink your coffee with milk, you may be drinking a café au lait. A café au lait is really strong coffee, such as an Americano (not espresso), with some warm milk. Yup, that’s it. Nothing special, but still really delicious.

Ever see a cup of coffee with a cool foam design? Yup, totally not coffee, but probably a latte (or a cappuccino—I’ll get to that in a second), which is a shot of espresso, steamed milk, and a little bit of milk foam on top, making up a 1:3:½ ratio. And when I say steamed milk, I’m not talking about warm or boiled milk. Oh no, we’re getting fancy. To steam milk at home, you’ll need at least a steam wand, or an espresso machine, which often has a steamer attached. And if you’re lactose-intolerant like me, you can totally replace the milk with a dairy-free alternatives, such as almond or soy milk.

From here on out, it may start to get a little complicated. But don’t worry, I’ll keep it simple.

So if lattes and cappuccinos are made of espresso, steamed milk, and milk foam, what’s a macchiato? The exact same thing! But unlike all of our previous coffee beverages, this time the steam milk goes in first, followed by the espresso, and milk foam. This creates a cool layered effect, which is why many macchiato’s in coffee shops are served in tall glasses. In terms of taste, a macchiato has more milk than a cappuccino, but less milk than a latte, it will be in between the two in terms of taste.

If you’re a chocolate lover, you may already know what a mocha is. Yup, similar to a cappuccino, but with hot chocolate added. That one was pretty easy. Now for the really fun stuff …

You may have to explain what a cafè breve is to most coffee baristas in mainstream coffee shops, so get ready for this; It’s espresso and foamed half-and-half. A cafè breve is rich and creamy, and it makes a great dessert to any meal. This isn’t something for every day—we want to remember moderation, balance, and variety—but it’s a great treat for the end of a hard week.

So, there you a go. Now you have a cheat sheet for coffee-based drinks. Now you can go to the nearest coffee shop, order an Americano, cappuccino, and café au lait, and know exactly what you’ll get.

This article was written by Kamilah Guiden and reviewed by Megan Meyer, PhD.