While coffee and tea take the cake when it comes to the world’s favorite caffeinated beverages, there’s much more in store beyond those two. I, for one, though a lifelong coffee fanatic, am always intrigued when my husband and I take road trips and he stops for some non-coffee caffeine to power him up for the long drive. Caffeine doesn’t appear solely in liquid form either—food innovators have amplified breakfast bars, desserts and candies into caffeine-containing fuel. In honor of Caffeine Awareness Month, let’s explore these other sources of caffeine.

A Reminder on Recommendations

Before you do a major taste test of all these new caffeine-containing products, it’s important to remember that caffeine is a stimulant and too much can be problematic if you’re not careful. The Food and Drug Administration (FDA) recommends adults consume no more than 400 milligrams daily.  For pregnant and lactating women, the FDA recommends half that—200 milligrams total in a day. No recommendation is set for young adults or teens. Note that this is the maximum recommendation—not everyone can tolerate the same amount of caffeine in a single day. Every person will have a different level of sensitivity to caffeine, so you should closely monitor yourself for symptoms like upset stomach, feeling jittery and headache. It’s also recommended that consumers of caffeine moderate their caffeine intake on a daily basis. Needless to say, it might not be a great idea to try all these new foods and drinks in a single day.

In addition to your morning cup of coffee or tea, you may find yourself needing some extra caffeine in the afternoon. While some turn to soda, iced coffee or iced tea, energy drinks and shots are growing in popularity. While an eight-ounce can of an energy drink may only have 70–80 milligrams of caffeine in it, be aware that an energy shot may contain up to 200 milligrams—half the recommended daily maximum for adults.

These drinks aren’t the only beverage sources for extra caffeine. For example, hot chocolate contains about five milligrams of caffeine per cup. Other chocolatey drinks (hot or cold) likely contain similar caffeine content since chocolate naturally contains caffeine. While five milligrams may seem like nothing compared to a 200-milligram energy shot, it’s still important to note, especially when serving chocolate drinks to kids.

Chocolate obviously doesn’t come only in liquid form. Chocolate bars as well as chocolate-containing desserts, granola bars and other snacks are all additional sources of caffeine that you may not immediately think about. If you’re eating a chocolatey granola bar or maybe some leftover chocolate cake with a cup of coffee in the morning, you may not notice the additional caffeine in the moment, but it’s important to keep in mind when you consider your overall daily intake. While some granola bars and snacks call out their caffeine content by using ingredients like chocolate and coffee flavors, others have gone beyond the obvious and added synthetic caffeine to bars of many other flavors. These bars may contain more caffeine than an average cup of coffee, meaning it’s extra important to consider the overall caffeine content if you decide to add these to your diet.

Caffeine has broken through to the confectionary realm, too. As noted previously, chocolate naturally contains caffeine—specifically, milk chocolate has around five milligrams per ounce and dark chocolate has about 15 milligrams per ounce. In addition, some chocolate bars have caffeine added beyond that which naturally occurs, so always be sure to look at the packaging and ingredient lists of these products. Beyond chocolate, caffeine-containing chewing gum and candies can also be found on the market for those who are looking for a unique treat as an afternoon pick-me-up.

For some, food and drinks are not enough for caffeine intake, and they may resort to pure caffeine pills and powders. While these provide the benefits of caffeine, be aware that they may be extremely potent and therefore potentially dangerous. The FDA warns against these products due to the high risk that comes with taking in excessive amounts of caffeine.

It’s important to always check the Nutrition and Supplements Facts panels so that you know  how much caffeine, in addition to other ingredients, you will be consuming. The Caffeine Calculator developed by the International Food Information Council Foundation may also help you figure out how much caffeine you consume on a daily basis—as well as where you may need to cut back.

This article was written by Courtney Schupp, MPH, RD 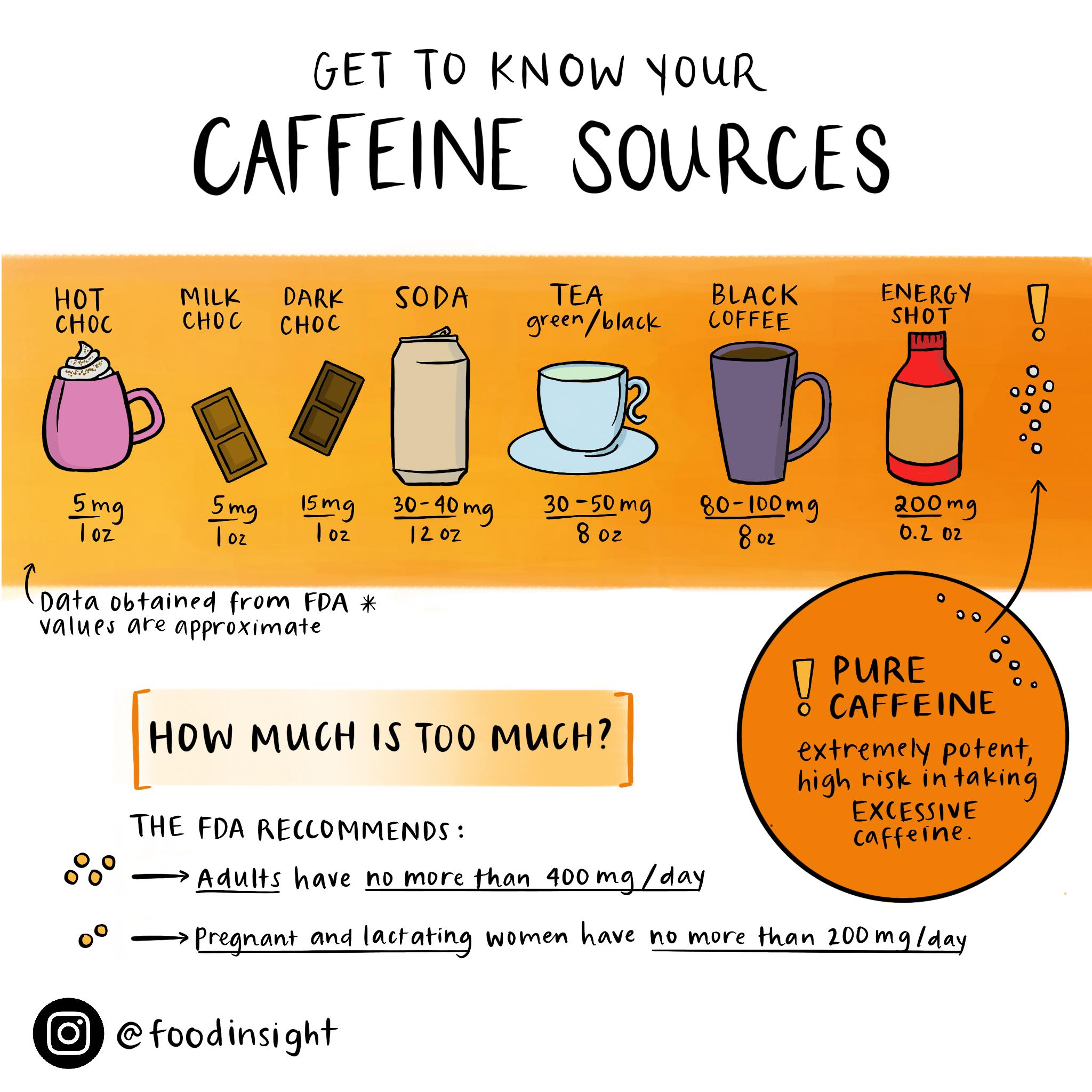