While the International Food Information Council (IFIC) Foundation is primarily a U.S.-based educational organization, the “international” in our name recognizes the global nature of food and health issues.  Out of our 1+ million annual website visits, 35 to 40 percent typically come from outside the United States. On an annual basis, FoodInsight.org is visited by people in every country of the world and speakers of more than 90 languages.

We are involved with an independent network of Food Information Organizations (FIOs) and partners from around the world.  We engage with developed and emerging market-countries; host global summits and workshops on diverse topics including food safety, noncommunicable disease prevention and control, and modern food production; and facilitate the International Center of Excellence in Food Risk Communication. We also have been engaged as a Civil Society Delegate with health ministers from around the world at the 69th World Health Assembly in Geneva, Switzerland.

I recently spoke with the Ambassador of Switzerland to the United States, His Excellency Martin Dahinden, about Switzerland’s influence on U.S. food.  The Ambassador has an upcoming book that will be published in German in August 2016: Schweizer Küchengeheimnisse (Swiss Kitchen Secrets).  I wanted to share some excerpts of Ambassador Dahinden’s recent remarks entitled “Switzerland’s Culinary Footprint in the United States” from American Swiss Foundation’s 71st Annual Gala Dinner held in New York City on May 4, 2016. Below, you can also watch a video of a recent conversation I had with the Ambassador.

Today, I will speak on something completely different: about Switzerland’s culinary footprint in the United States. … This is something I have done with enthusiasm since I arrived in the United States in 2014. I discovered many unknown and exciting stories I will refer to. Swiss culinary art and heritage is definitely much more than raclette, fondue and müesli.

Let me start right here in the Big Apple, in New York.

The Delmonico’s Restaurant was the most celebrated place you could eat in the 19th century, and particularly during the years the Union League Club was founded. Few people know that the Delmonico’s was established by a family from the Italian-speaking part of Switzerland. Lorenzo the Great, as was called the most famous of the Delmonicos, attracted the most distinguished guests of his time, from Queen Victoria to President Lincoln and Theodore Roosevelt, Mark Twain, Charles Dickens or Oscar Wilde, up to the protagonists of the Gilded Age like the Astors, Morgans, Goodyears, Vanderbilts or Rockefellers. Many dishes known to the present day were created in this vintage restaurant like the Delmonico Steak, the Lobster Newberg or the Baked Alaska. Those dishes are also part of Swiss-American culinary heritage.

Oscar Tschirky came as a poor immigrant from Neuchatel to the United States and made an outstanding career as a chef of organizer. He did run the kitchen of the Waldorf-Astoria when it opened in 1893 and stayed in this position for another 50 years. He was instrumental for establishing the reputation of the house. Oscar’s Brasserie in the Waldorf-Astoria still remembers him. His most famous creation is the Waldorf salad. Few know the Swiss connection of this dish.

Irving Berlin’s song “Puttin’ on the Ritz” remembers us of one of the most outstanding entrepreneur sin gastronomic history, Cesar Ritz. The man who became synonymous for a lavish life style in the Belle Époque worked at the beginning of his professional live in a tavern of his home village in the canton of Valais. The owner of the tavern threw him out, as he was convinced Ritz would never make his way as a waiter. Ritz became one of the most innovative and skilled organizers in gastronomy. As an entrepreneur, he built up a sort of worldwide hotel empire with a franchising system.

But there are more subtle links between Swiss and American gastronomy. Dunand, a citizen of Lausanne, was the famous Chef of Napoleon. He followed Napoleon to the battlefields and prepared sumptuous dinners. But before becoming the French Emperor’s chef, Dunand worked at the same aristocratic household in France where Jefferson sent his Chef Hemmings to get familiar with the French cuisine when Jefferson was the U.S. Envoy in Paris. Later Jefferson brought many recipes to the United States, including the French fries and his famous vanilla ice cream.

The most important Swiss chef of all time is one of the least known: Maestro Martino. He defined to a large extent the Renaissance cuisine at worked in many places, including at the court of the Sforza in Milan, and with two Renaissance popes in Rome. He obviously never made it to America. But his handwritten recipes are kept in the Library of Congress in Washington, D.C. His recipes look very Swiss, as they are the first recipes with an indication of time. As there were no watches in Renaissance kitchens, he indicated the number of Pater Noster to pray for the different steps.

Up to the present day we can trace outstanding culinary achievements. I recently had the chance and the pleasure to meet with Henry Haller. Henry Haller was the chef of five U.S. presidents: Johnson, Nixon, Ford, Carter and Reagan. The dishes he created for the five presidential families reflect their taste and personality like little psychograms. They are well worth to read and to cook.

And we all know are proud of the fame of Daniel Humm, chef of the Eleven Madison Park in New York City, one of the top restaurants in the world, and which has in 2014 been named the best restaurant in the United States.

All those culinary achievements don’t look like the traditional food we associate usually with Switzerland. But they are very Swiss: quality, organization and innovation play an important role, as did the openness to other cultures and kitchen traditions far beyond the birthplace.

This applies certainly also for Nestlé, our host tonight. My favorite character in Nestlé’s culinary history is Julius Maggi, the brilliant inventor of the Maggi cube, with his tireless quest to make tasty food accessible to the modern household of his time. One the stories I like most is the astonishing parallel between the Maggi cube and cubism as an arts style. They both have arisen in the same time in pre-First World War Paris, and in an early cubist work of Picasso we can even find the Maggi cube.

I have collected all those and many more forgotten about Switzerland and its culinary history, and fortunately I found an editor in Switzerland who was so excited about them as myself and will publish them later this year (in German, I must say, for the time being).[1]

Thank you very much for your attention.

Here are two of the recipes mentioned in the video, from “Dishes for the Generals’ Room”: 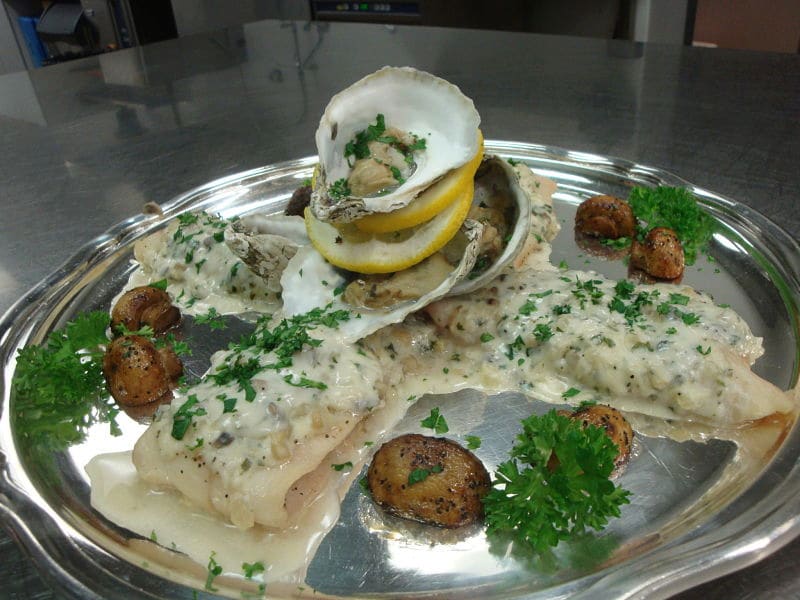 Many filet of sole recipes at Delmonico’s were prepared in a similar way. What makes the Filet of Sole à la General Sherman special is the use of oysters.

8 small oysters, in their shells

8 button mushrooms, cut in half

Sauté the onion in 1 tbsp of butter for 3 minutes until soft and translucent, then add the minced mushrooms, ½ tsp parsley and chervil. Season with salt and pepper and add the white wine. Let the wine reduce to almost dry. Reserve this mixture.

In a saucepan, melt 1 tbsp of butter and add the flour. Stir to cook for 3 minutes without browning, then add the milk and stir to cook until boiling and cook for 2 minutes longer, stirring constantly.

Strain the milk sauce through a sieve into the reserved onion and mushroom mixture and mix well. Cook for another 2 minutes. Reserve the sauce.

Open the oysters and reserve their juice. Loosen the oyster from the shell and keep it on a half shell.

Season the filets of sole with salt and pepper and arrange them on a well-buttered baking dish and pour the oyster juice over the filets. Place the oysters in the center of the dish with the fish and bake for 3 minutes at 350°F. Remove the fish from the oven and pour the reserved sauce all over the top and return to the oven and bake for 5 minutes longer or until the fish is cooked.

Sauté the mushrooms cut in half in 1 tbsp of butter and season with salt and pepper. Arrange the fish on a round serving platter and place the oysters in the middle. Decorate the dish with the half mushrooms around the platter and sprinkle with finely chopped parsley. Serve immediately.

Pudding à la U.S. Grant is an easy-to-make pudding with candied fruit, served with an elegant sauce made from peach marmalade and champagne.

1½ candied cherries, cut in half

Mix all first 6 ingredients together in a bowl.

In a separate bowl, whisk the eggs with the milk and pour over the fruit mixture and mix well for 2 minutes.

Butter 4 ramekins and coat with granulated sugar all around. Spoon the egg and fruit mixture into the ramekins ¾ of their height.

Place the ramekins in a baking dish large enough to accommodate them, then fill the dish with hot water to half of the height of the ramekins. Put it in a 300°F oven and bake for 45 minutes to 1 hour until the custard is set.

Meanwhile make the sauce putting the peach marmalade, quince jelly and butter together in a saucepan and heat it stirring until all is melted and incorporated. Let it boil for 1 minute. Remove from the heat and strain the sauce through a sieve into a sauce bowl.

Unmold the puddings on a dessert plate and pour some sauce over and serve.