Move over ramen, there’s a new bowl-friendly option in town. As a die-hard fan of the hip ramen trend, I was extremely curious to find out more about the latest bowl-centric food. What exactly is poké? Is it nutritious? Are there any concerns about the hottest food fad? 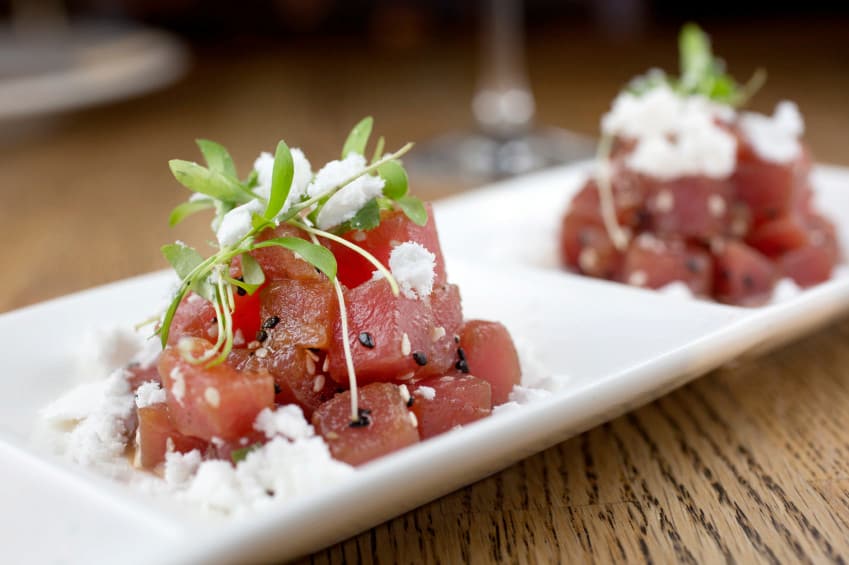 First things first, it’s pronunciation. Poké is pronounced POKE-AY and hails from the tropical islands of Hawaii. Its name originates from the Hawaiian word which means “to section, slice or cut”. This name is fitting as poké is generally made from cubed yellowfin tuna. Similar to ceviche or tartare, poké is made from raw fish that is marinaded soy sauce and sesame oil but has broad creative license in additional ingredients that are added.

Some variations will include seaweed, chili pepper, tomatoes, or green onions. Sometimes, poké will be served a top a bed of rice, a pile of noodles, or a handful of thinly sliced cabbage. Really, it seems like anything goes, as long as the marinated fish is the star of the dish.

Beyond its ingredients and tradition, what about poké’s nutrition? That’s where the plot err.. poké thickens. Tuna is rich in protein, which support weight management and muscle development. It’s also packed with polyunsaturated fatty acids, such as omega-3s which support cardiovascular function. (As a bonus, omega-3s also promote healthy skin, hair, and nails.)  Tuna is full of vitamins and minerals like vitamin B12 and selenium. These micronutrients are important for nervous system function and protection against cellular damage.

But it can’t all be good news, right?

Poké may not be ok to eat during pregnancy. Raw or undercooked meat or fish is not recommended for pregnant women, who are at higher risk for foodborne illness than the general population. The FDA recommends that pregnant women choose fully cooked fish instead of raw or undercooked fish (like sushi or raw poke) to lower their risk of potentially life-threatening foodborne illness.

Yellowfin tuna also contains levels of mercury, an unavoidable natural contaminant in open ocean fish. High levels of mercury are known to be toxic to humans. Although there have been reported cases of mercury poisoning in industrial pollution and accidents, there have been no cases of mercury poisoning from fish. Large tuna, marlin, swordfish, and sharks do contain mercury, but at much lower levels than fish from polluted waters. Buying fish harvested only from approved waters is therefore pretty critical to food safety. To be prudent, the EPA and FDA recommend that pregnant women avoid swordfish, shark, king maceral and tile fish.

The scientific community has determined that the health benefits of eating seafood far outweigh the risks from mercury reported in some open ocean fish. So pregnancy doesn’t mean you have to go nine months without eating any fish or seafood. In fact, it’s recommended that pregnant women eat up to 12 oz (about 4 “deck of cards” size servings) of low-mercury seafood, such as salmon, tilapia, tuna (canned or pouched), or catfish each week. One interesting twist (that’s not commonly known!) is that many open ocean fish species also contain an excess amount of selenium, which is known to protect against mercury toxicity.

Want more info on how to meet your nutrient needs (while staying food safe) during pregnancy? Check out our Healthy Eating During Pregnancy guide.

So there you have it. The 4-1-1 on the next food fad to sweep the country. It may be a healthful option for most of the general population, but if you are pregnant or immunocompromised, it may be best to stay away from the poké.