Want to know how to pique someone’s interest if you are talking about food or nutrition? Mention the word “antioxidant.” Seriously, it has some special power or something. Family and friends, ranging from my teenage sister to my best friend from college to my 80-year-old grandpa—each person has asked me a series of questions about antioxidants, such as common sources, health effects, and my general opinion of them.

I think that “antioxidant” grabs interest because it is the perfect combination of abstract science and concrete action words. Does hearing the prefix “anti” immediately make you think it will help combat whatever is after the prefix? And does “oxidant” sound like something you would like to avoid? Chances are, you answered yes to both questions (I know I did!). It’s probably why there’s been so much interest into the continuously growing field of antioxidants.

First things first, what is the actual definition of antioxidants? Fortunately for us, back in the late 1990s, the National Academy of Sciences outlined a definition with the creation of the comprehensive review, “Dietary Reference Intakes: Proposed Definition and Plan for Review of Dietary Antioxidants and Related Compounds.” The panel’s proposed definition of an antioxidant “is a substance in foods that significantly decreases the adverse effects of reactive oxygen species, reactive nitrogen species, or both on normal physiological function in humans.”

While it’s all well and good that there is a consensus on the definition, I am not entirely convinced that this definition is completely clear. For example, what the heck are “reactive oxygen species” and “reactive nitrogen species”? While these phrases may seem foreign and/or scary, they are pretty easy to understand, once given some appropriate context.

Reactive oxygen species and reactive nitrogen species belong to a class of compounds called free radicals. Wondering what’s with the “radical” name? Radical used in this way means that the compound is unstable, highly reactive, and can cause cellular damage. Now, before you begin to think that free radicals are the root of all evil, let’s take a quick pause. It’s important to note that these compounds are produced by the body, are formed as a result of using oxygen in the body, and play important roles such as cell signaling, cellular reproduction, and immune health. It is impossible to completely banish free radicals because basic biologic functions depend on them. 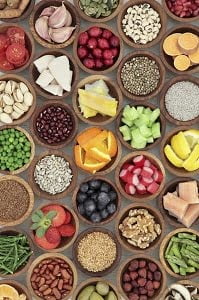 However, there are instances when high concentrations of free radicals can be hazardous to the body and damage key components of cells such as the DNA (aka the genetic info found in your cells), cell proteins (what makes up cells, tissues, and organs), and cell membranes (what holds your cells together). This is when antioxidants come into play: They help fight the negative effects of free radicals to limit damage. Because of this, antioxidants have garnered much interest in recent years.

Although the body can produce its own antioxidants, it also relies on dietary antioxidants to help combat the effects of free radicals. Examples of dietary antioxidants include vitamins A, C, and E; β-carotene; the mineral selenium; and lycopene. And many different types of antioxidants can be found in fruits, vegetables, grains, dietary supplements, and fortified foods.

While antioxidants play an important role in health promotion, I find it alarming when I hear or read about how “antioxidants are the cure to all ailments.” A recent headline grabbed my attention since it basically said that “antioxidants can cure cancer.” Think so those statements might be too good to be true? Unfortunately, they are.

Turns out, animal studies and cell culture studies have shown that increasing antioxidant levels prevents free radical damage that has long been associated with cancer development. But those studies are in models that lack direct human application. More tailored for human application, epidemiological studies have yielded mixed results that dietary antioxidant supplementation is associated with reduced risk of cancer.

While antioxidants do play a role in health, they certainly are not going to cure cancer or make you feel like you are 20 again. Instead of putting all your eggs in just the antioxidant basket, focus on a balanced diet that includes fruits and vegetables, lean protein, whole and enriched grains, healthy fats, and fortified foods. Eating this way will make sure you are getting all the nutrients you need without getting caught up in the small details.