When you think of presidents and food, you might remember some modern-day highlights like Bill Clinton’s vegan meal plan or Ronald Regan’s jelly bean obsession. But presidential cuisine has a rich history. Let’s turn back the clock to bring you some lesser-known nutrition and food safety highlights from past presidents.

Zachary Taylor’s Food Safety Catastrophe—As a Washingtonian, I know how hot and humid summer in the capital can be. All the more reason to play it (food) safe when planning a Fourth of July picnic. On July 4, 1850, President Zachary Taylor (in office March 4, 1849 – July 9, 1850) fell ill and passed away after attending festivities on the dedicated grounds where the Washington Monument would be erected. Though no one knows exactly what was the culprit, many suspect it was a case of food poisoning. Always remember the basics of “clean, separate, cook, chill,” especially when braving a hot summer day in D.C. 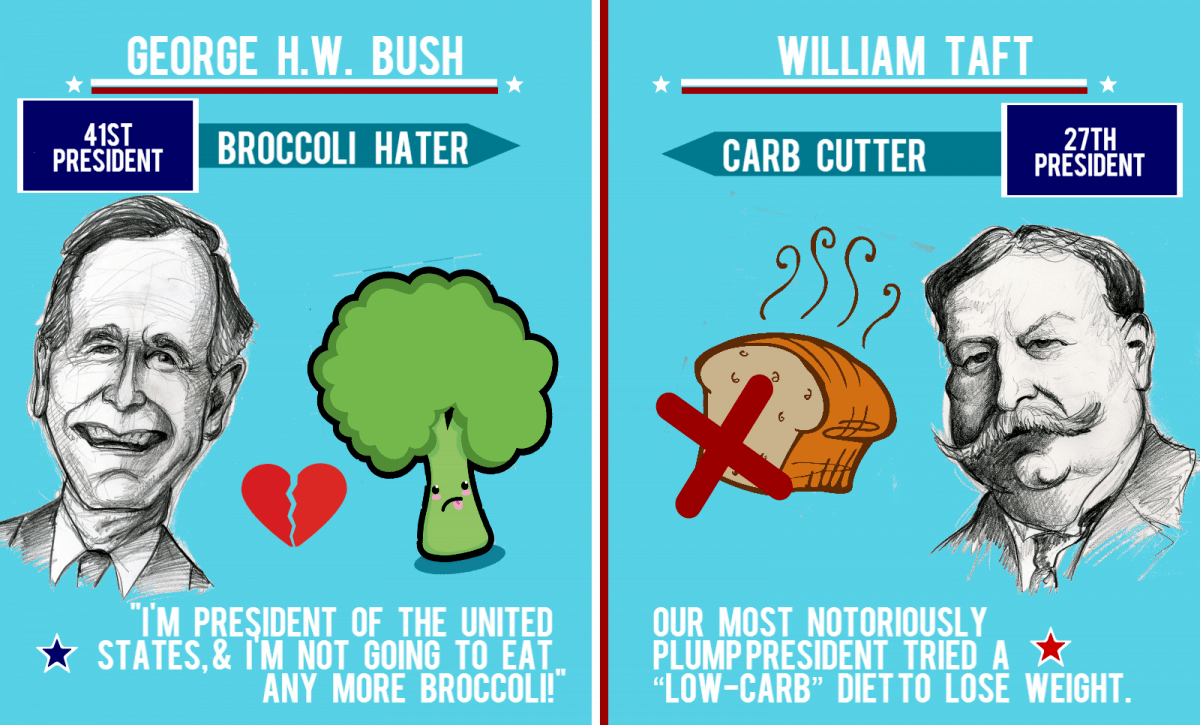 Woodrow Wilson’s “Meatless Tuesdays” & “Wheatless Wednesdays”—“Meatless Monday” is not an entirely new concept. It may sound as though President Wilson (March 4, 1913 – March 4, 1921) was trying to promote a vegetarian or gluten-free lifestyle, but he was actually trying to help save rations for soldiers during the First World War. The short-lived United States Food Administration spearheaded the program.  Americans across the country gave up certain staple foods (like meat and wheat) on specific days to help the war effort.

President Taft’s Low-Carb Diet—Historians have noticed that low-carb dieting is not just a modern-day trend. President Taft (March 4, 1909 – March 4, 1913), our most notoriously plump president, tried a “low-carb” diet in order to lose weight. A typical lunch consisted of 4 oz. of lean grilled meat, 4 oz. of vegetables, 4 oz. of fruit, and a gluten biscuit. Taft’s low-carb diet was actually pretty lenient on the carbs and contained a great balance of different nutrients. In fact, his lunch is a perfect example of the MyPlate recommendations in action. Also, his doctor ordered him to exercise, keep a food diary and track his weight daily. Looks like the prevailing weight loss recommendations hasn’t changed much since 1905.

George H. W. Bush’s Deep-Seated Hatred of Broccoli—Even presidents have foods they will never, ever eat. President George H. W. Bush (January 20, 1989 – January 20, 1993) made that abundantly clear in his 1990 rant against broccoli: ”I don’t like broccoli. And I haven’t liked it since I was a little kid, and my mother made me eat it. And I’m President of the United States, and I’m not going to eat any more broccoli!” I know plenty of dietitians (myself included) who are right there with you, George. But you don’t have to invoke the powers of the Executive Office to defend your food preferences. Just remember that a healthy diet is all about balance, variety and moderation … no broccoli necessary.