What is the Flexitarian Diet? 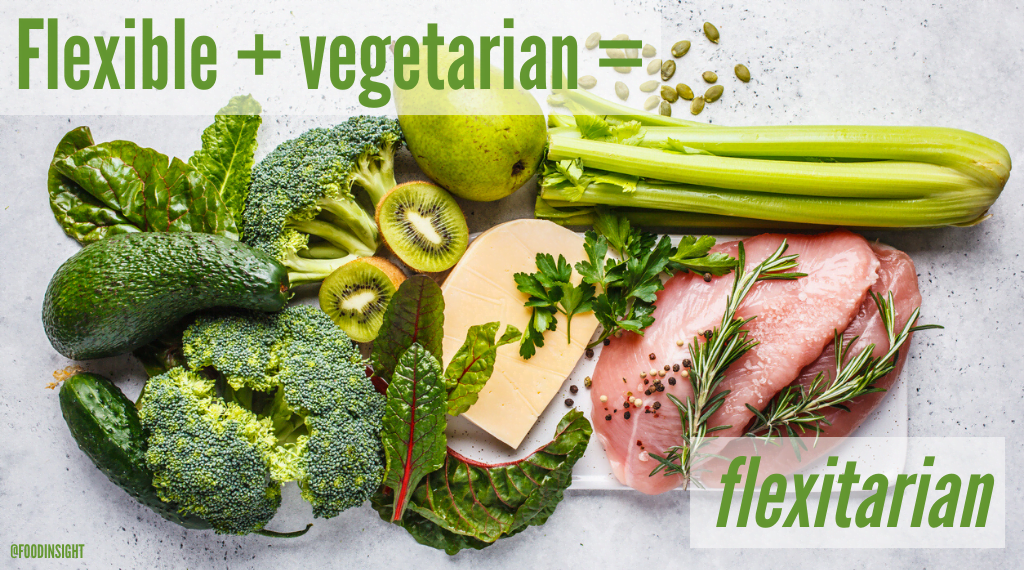 Most Americans do not consume the recommended amounts of dairy, fruits, legumes (e.g., chickpeas, lentils and beans, including soy), seafood, vegetables or whole grains.1,2,3 While a complete diet overhaul may seem daunting, one style of eating—the “flexitarian diet”—attempts to make it easier to shift dietary choices by focusing more on what can be added to the diet rather than what should be taken away.

The flexitarian diet is a play on two words: flexible and vegetarian. While no single definition has been adopted, the flexitarian diet can be generally defined as a semi-vegetarian, plant-forward diet that incorporates dairy and eggs and allows room for meat from time to time. The emphasis on plant foods is thought to contribute to the health benefits associated with a vegetarian diet without requiring compliance to the dietary rules of 100%-vegetarian or vegan diets.

There are no set calorie or macronutrient goals in a flexitarian diet. Instead, the goal is to increase the consumption of plant or plant-based foods over time, keeping in mind that meat is not off-limits but rather that it is eaten less frequently and/or in smaller portions.

Calories in the flexitarian diet mostly come from nutrient-rich foods such as fruits, legumes, whole grains and vegetables. When it comes to protein, plant-based foods (e.g., soy foods, legumes, nuts and seeds) are the primary source. Protein also comes from eggs and dairy, with lesser amounts coming from meat, especially red and processed meats. Due to the emphasis on nutrient-dense foods, the flexitarian diet encourages limiting one’s intake of saturated fat, added sugars and sodium.

The Flexitarian Diet and Your Health

A flexitarian diet can have a positive impact on health,4,5 while being less strict than a 100%-vegetarian or vegan diet. The plant-forward philosophy of a flexitarian diet aligns with the 2020–2025 Dietary Guidelines for Americans which recommend choosing more nutrient-dense foods (fruits, vegetables, legumes, whole grains, low-fat dairy, lean proteins and healthy fats) and beverages and relatively less red and processed meats, sugar-sweetened foods and beverages, and refined grains.3

A 2016 review of evidence-based literature that included 25 studies (four randomized controlled trials and 21 observational studies) examined the effects of adopting a flexitarian diet.6 It should be noted that the definition of the diets included in this review varied slightly, ranging from “a diet comprised of a total of red meat or poultry ≥1 time/month but all meats combined (including fish) <1 time/week and eggs/dairy in any amount” to “a diet recommending moderate levels of animal intake.” The review described emerging evidence suggesting that the flexitarian diet can help improve markers of metabolic health, reduce blood pressure, and decrease the risk of type 2 diabetes. The same review found that a semi-vegetarian or flexitarian diet may also have a role to play in the treatment of inflammatory bowel diseases such as Crohn’s disease.

The protective effects of the foods emphasized in the flexitarian diet are thought to be due to multiple beneficial nutrients contained in these foods, including mono- and polyunsaturated fatty acids, omega-3 fatty acids, antioxidant vitamins, minerals, phytochemicals, fiber and protein.

There is a growing body of evidence examining the health effects associated with adopting a flexitarian diet, including implications for heart disease, diabetes, cancer and weight management.

Eating more plant-based foods through a flexitarian or semi-vegetarian diet may reduce one’s risk for cardiovascular disease. Research has shown that a diet comprised predominantly of plant-based foods, such as fruits, vegetables, legumes, nuts and whole grains is associated with a lower risk of CVD.7

Several studies have examined diets high in plant-based foods and their impacts on diabetes-related risks. Compared to non-vegetarian diets, flexitarian diets are associated with significantly lower levels of glucose, insulin, and reduced insulin resistance,8 as well as a reduced risk in developing diabetes mellitus.9

Flexitarian or semi-vegetarian diet patterns have been associated with reduced risk of certain types of cancer, including colon cancer.10

Most Americans consume about half the dietary fiber that is recommended each day (which is 14 grams per 1,000 calories consumed), and only about 5% of the population meets the recommendations for dietary fiber intake.11 Consuming more plant-based foods can help increase a person’s daily dose of dietary fiber, which plays key roles in gut and bowel health, promoting adequate digestion and absorption of several nutrients. Moreover, dietary fiber consumption has been linked to a host of potential health benefits, including reduced risk of cardiovascular disease, coronary heart disease, stroke, hypertension, certain gastrointestinal conditions, obesity, metabolic dysfunctions like prediabetes and type 2 diabetes, and some types of cancer.12

Dietary Sources of Vitamins and Minerals

Plant-based foods contain many vitamins and minerals that are good for health, including vitamins A, C, E, K and folate and the minerals potassium, phosphorus, magnesium and manganese. These nutrients, which are often not consumed in adequate amounts, are vital to the health of our eyes, immune system, muscles, heart, nerves, skin, gut, brain and more. While the main emphasis of this diet is on the benefits of plant-based foods, dairy and eggs are also allowed and provide high-quality protein in addition to other nutrients. Dairy contains B vitamins, potassium, calcium and vitamin D and eggs provide vitamins A, D, E, choline, iron, lutein and folate.

The replacement of animal-source foods with plant-based foods not only has positive health outcomes; it can also exert a gentler impact on the environment.13 Plant-based foods can help consumers meet functional and nutritional requirements while generating fewer GHG emissions compared with omnivorous diets or animal foods.14,15,16

However, it’s worth noting that these comparisons do not account for the lower bioavailability of some nutrients, such as iron and protein, in certain plant foods. This means that our bodies are not able to absorb some nutrients from certain plant foods as efficiently as we can from animal foods. As a result, the environmental footprints of some plant-based foods do increase when calculated on the basis of nutrient density. 17

Tips for Trying a Flexitarian Diet

At its core, the flexitarian diet allows for flexibility, which may be appealing to some who are looking for a path to improved health that has fewer rigid rules. The main purpose of this diet is to slowly increase one’s plant intake over time without omitting animal foods. With its emphasis on plant and plant-based foods, the flexitarian diet is comprised of beneficial vitamin-, mineral-, and fiber-containing foods and has been associated with a reduced risk of type 2 diabetes, cardiovascular disease and cancer.