What A Pediatrician Would Tell You About Arsenic, Rice, and Food Safety: Q&A with Dr. Claire Chehrazi

This week, FDA released their risk assessment on arsenic levels in rice products. Their main conclusion? “Consumers can certainly eat rice as part of a well-balanced diet.” They also share that based on their scientific assessment, they think it would be prudent for parents and caregivers to feed their infants a variety of fortified infant cereals and for pregnant women to vary their grains. We talked to Dr. Claire Chehrazi, pediatrician, to find out more about what this means for our food:

FoodInsight: What is arsenic, and why would it be in food?

Dr. Claire Chehrazi: Arsenic is a metal found in soil and water, both naturally and due to man-made sources. It’s found in small amounts in many plant-based foods because, during growth, plants naturally absorb trace amounts of arsenic from the soil and water. You may hear of two types of arsenic: inorganic and organic (unrelated to organic farming). Inorganic arsenic is the type of arsenic that, in large quantities, can cause adverse health problems.

CC: All plant-based foods contain trace amounts of arsenic, including grains, such as rice, corn, and wheat, fruits and vegetables, as well as wine, and some juices. Rice has been shown to absorb more arsenic than other grains because it’s grown with large amounts of water.

FI: What are ‘trace levels?’ How much arsenic is in rice?

CC: The term “trace levels” is used to indicate that very, very small amounts may be present when using highly sensitive detection methods. As an example, we measure arsenic in food in parts per billion.  The amount of arsenic in rice and rice products varies based on where the rice was grown, seasonal growing conditions, soil conditions and weather patterns, whether it is brown or white, and what kind of rice product it is. Generally, one serving of rice and rice products contains an amount of arsenic that equals about 1/100th of one grain of table salt.

CC: Brown rice and white rice are from the same rice plants. Brown rice is brown because it is a ‘whole grain,’ which still has the germ and side hull intact. Whole grains like brown rice contain important nutrients, such as iron and fiber. When the germ and side hull are removed, brown rice becomes white rice, which is not a whole grain. Rice products are products made from rice, such as rice crackers, rice flour, cereals, and brown rice syrup, which is used as an alternative sweetener to sugar and corn syrup. Although brown rice has slightly higher levels of arsenic than white rice, the overall health benefits of brown rice are much greater.

FI: Is arsenic in the diet dangerous?

CC: We know that foods like grains, fruits, and vegetables are part of a nutritious and balanced diet that results in fewer long-term health problems.  While not new news, the recent FDA report again confirms that, in the United States, arsenic in the diet can result in low-level exposure. Arsenic passes through the body, rather than building up. It is well documented that extremely high-level exposure to arsenic has long-term health effects. The best available evidence shows that low-level exposure, like trace amounts in food, does not have long-term health effects and that rice as part of a balanced diet reduces health problems. This is supported by fewer health problems in countries where rice is a much larger part of the diet, such as in Japan.

FI: Are rice foods safe? What about for toddlers and children?

CC: Yes. The newest findings from the FDA confirm that rice foods are safe for all ages, when eaten as part of a balanced diet. Rice, especially brown rice as a whole grain, is part of a nutritious diet and has protective effects for health.  In order to maximize the health benefits of foods, rice should be one of a wide variety of grains and foods you provide your children.   The FDA and American Academy of Pediatrics recommend that parents and caregivers:

In general, the FDA’s general advice is to “eat a well-balanced diet that’s not based on any one food,” which “extends to all consumers, including toddlers, older children and adults.”

FI: What’s being done to make sure our food is safe?

CC: Numerous government agencies, including FDA, EPA, and USDA, as well as health and regulatory authorities globally, are working to set specific limits for arsenic content in rice, so that there is consistency in what consumers eat. The ultimate goal is to ensure safety and minimize dietary exposure. To that end, the FDA is proposing a limit, or “action level,” of 100 parts per billion for inorganic arsenic in infant rice cereal (in line with the limit established by the EU). FDA testing found that “the majority of infant rice cereal currently on the market either meets, or is close to, the proposed action level.”

FI: Should I switch to organic rice products to avoid arsenic?

CC: Organic rice has been shown to contain the same amount of arsenic as conventionally grown rice.

FI: Do I need to eliminate or reduce the amount of rice I eat? Is there something else I should be doing?

CC: No.  Focus on moderation, balance, and a variety of whole grains, vegetables, and proteins in your eating habits. A diet that is rich in variety and consumed in moderation is what’s needed for a healthy lifestyle.  Include whole grain rice, along with diverse consumption of other whole grains, such as wheat, barley, oats, quinoa, bulgur, rye, amaranth, buckwheat, and millet. I recommend this primarily as part of a balanced, nutritious diet.

FI: What are the nutritional benefits of introducing rice foods to infants?

CC: Rice is part of a healthy diet, providing good amounts of fiber, vitamins, and minerals and is a healthy choice to provide to your infant, along with other grain cereals. 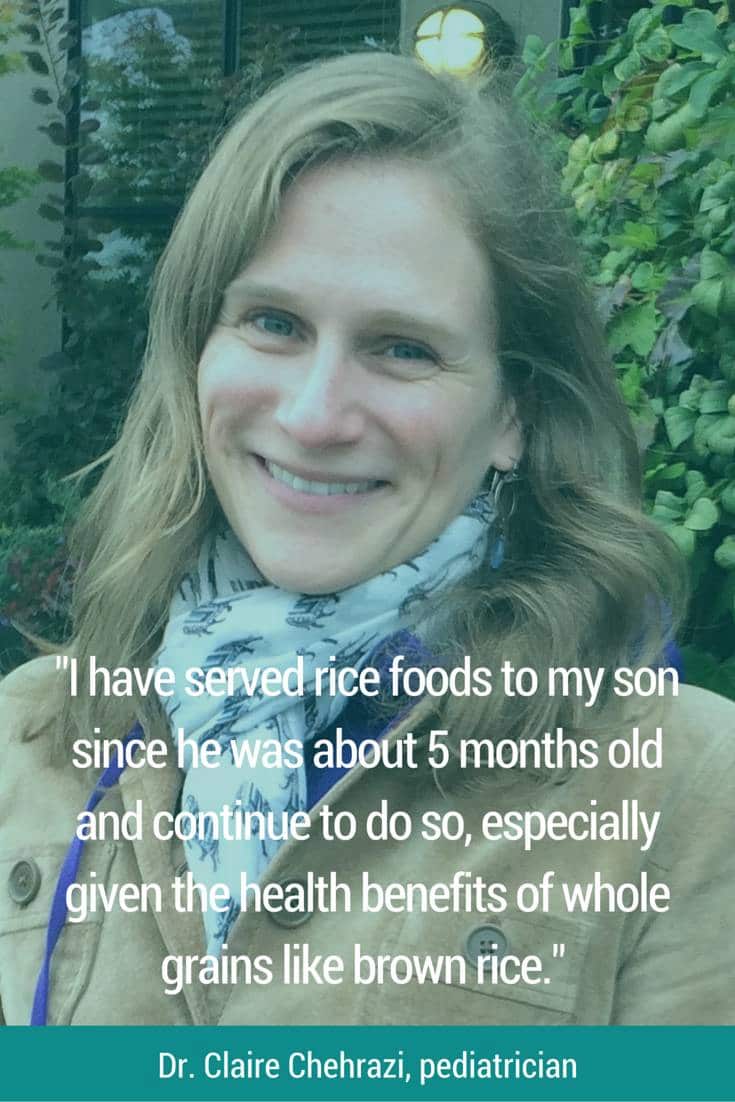 FI: As a parent and pediatrician, would you serve rice foods to your toddler?

CC: Yes.  I have served rice foods to my son since he was about 5 months old and continue to do so, especially given the health benefits of whole grains like brown rice. I counsel parents to educate themselves so that they can make decisions they’re comfortable with, and I do encourage rice, especially whole grain brown rice, as part of a healthy and balanced diet.

Want to dive deeper? Check out these additional resources on arsenic and food safety:

Food safety and nutrition expert Julie Jones, PhD, CNS, CFS, LN, of St. Catherine University, says that all food contains very small levels of arsenic, but the real thing to worry about is getting a good diet rich in nutrients.

Jones also says that if you truly tried to eliminate every trace of arsenic from your diet, you’d “starve to death.”