Gluten-free, ancient grains have been the star of grocery store aisles and nutrition articles alike over the past few years, and they’re not leaving the spotlight any time soon.  We’ve discussed the gluten-free diet at length, so let’s dig into a new (or actually, really, really old) player on the scene: sorghum.

Sorghum is a grain that originated in Africa; it’s a staple in many African, Asian, and South American diets. The sorghum plant is resistant to harsh conditions, including drought, so it is a vital food crop in areas where growing other types of grain is difficult.  Until recently, sorghum in the US was typically used mostly as livestock feed and to make ethanol. However, sorghum is steadily increasing in popularity in our diets, at least in part due to its nutrition composition.  It contains 10 grams of protein per half cup serving (cooked), is a good source of fiber, contains antioxidants, and just so happens to be gluten-free. Sorghum can be cooked and eaten whole (just like oats/rice/barley) or it can be ground into a flour and used in baked goods. 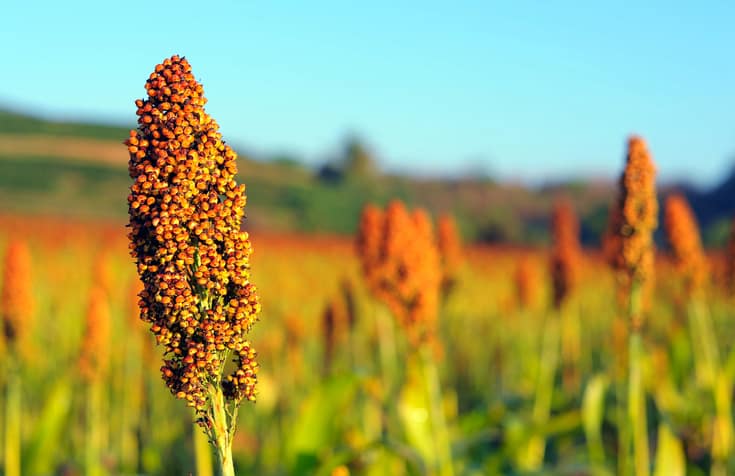 What are the associated health benefits?

Adding sorghum into meals and snacks can help increase your intake of whole grains, which can help you meet the recommendation from the 2015-2020 Dietary Guidelines for Americans to make at least half your grains whole. This is important because research has shown whole grain consumption can decrease the risk of cardiovascular disease and diabetes, two of the most common chronic diseases worldwide. Because sorghum is gluten-free, it’s also a good option for people who have Celiac disease or another medically diagnosed reason to avoid gluten.

High fiber and improved blood glucose control go hand-in-hand, so it’s no surprise that fiber-rich sorghum has been researched for its impact on blood sugar. Studies have shown that sorghum intake led to a decreased insulin and glycemic response when compared with intake of corn and rice.  Also, foods with sorghum have been shown to have a lower glycemic index than similar, wheat-based foods. This does not hold true for sorghum syrup, however. This sweetener is a staple of southern cooking, often used to sweeten beverages or spread on biscuits.

Compared to other grains, sorghum contains high levels of antioxidants, which help prevent cell and DNA damage. Antioxidants play a role in cancer prevention, and the intake of these powerful cell protectors has been shown to decrease the risk of certain types of cancer. Numerous studies have examined the link between cancer prevention the antioxidants in sorghum, which include tannins (yes, like in wine), phenols, and anthocyanins. Research is conflicted on this topic – some studies showed a dramatic decrease in new cancer cases with the consumption of sorghum, while others showed no change or even an increase. While we can’t promise that eating sorghum will prevent cancer, you absolutely will get more antioxidants, which is definitely a good thing for your overall health.

Sorghum is a great food to increase the amount of whole grains in your diet, help you get more fiber, increase antioxidant intake, and maybe even help control blood glucose to some extent.  It might not be a miracle food that can cure cancer or diabetes, but it is a healthy addition to any diet.  Sorghum can be especially useful for anyone with a medically diagnosed gluten intolerance, Celiac disease, or wheat allergy since it is gluten-free.

What are some ways to incorporate it into your diet?  You can toss cooked whole sorghum into any soup or salad, substitute it for oatmeal for breakfast, or even pop it like popcorn! Next time you want to shake up your whole grain routine, think sorghum.

This blog was written by Loren Bockweg, Sodexo Dietetic Intern.