There is so much chatter out there surrounding dietary fats. One headline will tout the need to completely remove fat from the diet while another will plead to bring butter back. This has led to some interesting changes in American perception regarding fats. In the annual International Food Information Council (IFIC) Foundation 2015 Food and Health Survey, we were able to track Americans’ feelings about health and nutrition, specific to dietary fat.

There are two types of dietary fats—saturated and unsaturated, which depend on the amount of hydrogen atoms that surround the fatty acid structure. This is called “saturation”. Saturated fatty acids are “saturated” or filled to the brim with hydrogen, contain no double bonds, and are typically solid at room temperature. These types of fat are typically found in animal products, fully hydrogenated oils, and tropical oils, like palm and coconut oil.

Health and nutrition topics are becoming more top of mind for many of us. In the IFIC Foundation 2015 Food & Health Survey, 91% of Americans state that they have thought about the healthfulness of foods and beverages, with women and college grads being more likely to have given more thought to this topic. Interestingly, fats are a particularly polarizing nutrition topic.

For example, 3 in 10 Americans have recently changed their opinion about the healthfulness of saturated fat within the last year.  Of those 30%, nearly a quarter believe saturated fat to be more healthful than they used to think. These shifts could possibly be attributed to a 2014 article in the Annals of Internal Medicine that questioned current dietary guidance on saturated fat intake. The article sparked convinced conversations in the media and scientific spheres.  The emerging chatter has not swayed official Dietary Guidelines from previous recommendations to limit saturated fat intake to 10% or less of total calories. But stay tuned, the role of saturated fat in heart health continues to be studied and debated. 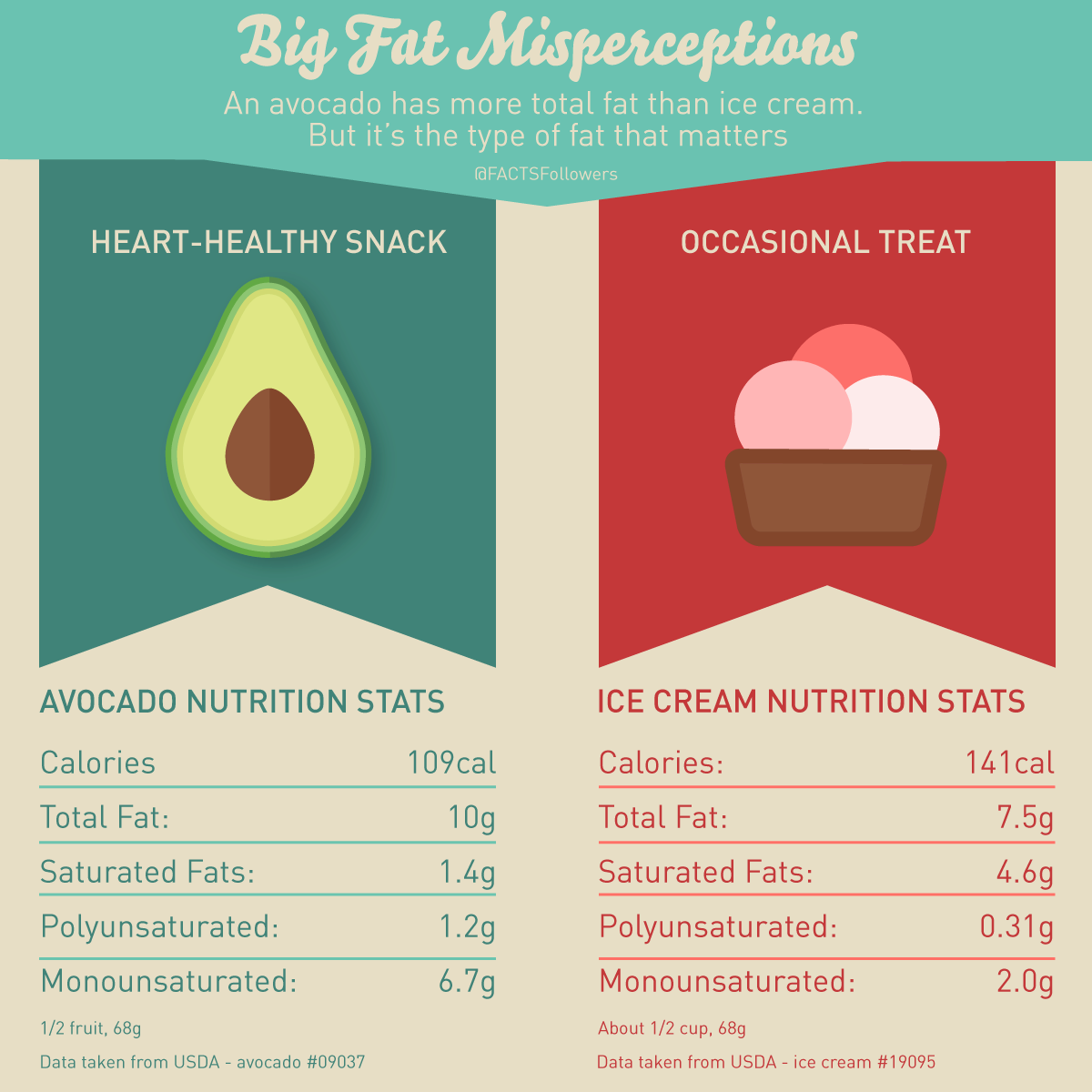 TRANSitioning to other fats

Another topic in the fats world attracting attention is trans fat. The trans fat in our diet comes from two sources—foods from animals (such as sheep, goats and cows) and some fats and oils used as ingredients in certain packaged foods. Partially hydrogenated oils (PHO) is the primary source of artificial trans fats in the diet. Consuming excessive amounts of trans fats (regardless if from animal sources or PHO) may raise your total and LDL cholesterol and triglyceride levels. Risk factors related to trans fat consumption, however, will depend on your personal level of intake and is why it is recommended to keep the amount of trans fat you eat as low as possible.

Since the 1990’s, there has been emerging science on the health effects of trans fat consumption, product reformulation to reduce PHO in the food supply, and Nutrition Facts labeling of trans fat which became mandatory in 2006. All of these have contributed to a decline in the consumption of trans fats in the form of PHO. In fact, from 2003 and 2010, the FDA estimated that consumption of trans fat from PHO decreased from 4.6 to 1.3 grams per day. That’s a 72% reduction! Moreover, recent FDA estimates indicate that our PHO consumption has gone down even further to 1.0 grams per day. This means our consumption has reduced almost 80% since 2003, and possibly even more than that given the data used for estimates is not reflective of current intake.

While this is extremely positive and promising, data from the IFIC Foundation Food and Health Survey show that more people ranked trans fat as healthful (11%) than ranked saturated fat as healthful (8%). With the recent FDA determination that PHOs are not generally recognized as safe, there is now a three year compliance period to remove PHOs from the food supply. Stay tuned for the result of this phase out, as other oils will have to replace PHO in foods and the impact of the swap on public health will be assessed.

A similar disconnect is observed in the perceived healthfulness of various oils. Americans rated olive oil (79%) as the most healthful oil while less than half (49%) rated canola oil as healthful. Consider this: canola oil contains more omega-3, more polyunsaturated fat, less saturated fat and only slightly less monounsaturated fat than olive oil.

So where do we go from here? Getting people to understand that there is more to healthful fats than just omega-3s, and that mono- and polyunsaturated fats are healthful fats to consume (not avoid), will be the biggest hurdles to surmount for improved health.

We’ve all heard advice to avoid eating fat for decades. Unfortunately, this advice was short-sighted and overly simplistic, which led to a decreased awareness and consumption of healthful fats. So let’s avoid another sensational story from saturating the next decade of dialogue. Instead let’s focus on balanced and inclusive diet guidance and maybe—just maybe—this catch-phrase will catch on: “Fats are like fonts. It’s the type that matters most”.