As humans, we want to make sense of our decisions, habits and surroundings. And it’s clear we’re a well-intended group of people, with one-third of us adopting an eating pattern last year, most of them motivated by what they believe is best for their health. But there are some discrepancies between what we’re trying to do and what the outcome is.

Our 2018 Food & Health Survey examined many different topics surrounding how Americans form beliefs and make decisions about food and nutrition. We’re going to dive into the results related to eating patterns—particularly, the diets people are following, why they’re following them and how they have (or have not) come to know and understand MyPlate.

What’s in a Diet?

One-third of people reported following a specific eating pattern, with intermittent fasting cited as the most popular option. Moreover, 16 percent of people reported following some type of low carb-related diet such as Paleo or keto. Reasons for adhering to these diets were fairly typical, the top one being that people wanted to lose weight, followed by wanting to feel better and to have more energy. Additionally, 77 percent surveyed were trying to reduce their sugar intake and 50 percent of that group tried to do so by eliminating soft drinks and candy.

Though many people are trying to restrict their intake, they may not be implementing some additional healthy behaviors like mindful eating. Mindful eating involves awareness while eating, and it can help you slow down and tune in to your hunger so that you achieve a state of comfortable fullness after eating—not too hungry, but also not uncomfortably full.

However, only about half of those surveyed say they stop eating when they’ve had enough but not too much, which means the other half are likely eating past fullness. These findings may be due to a couple of possibilities: Maybe the food people are eating isn’t satisfying, so they want to eat past fullness, or maybe they are mindlessly eating past fullness. Despite the popularity of diets, following a specific and often restrictive diet may not be helpful in achieving weight loss.

Another interesting finding from our Food & Health Survey was that Americans’ plates look quite different than what’s recommended by the Dietary Guidelines for Americans MyPlate tool. This might not be so surprising after hearing that only six in 10 had seen the MyPlate graphic before.

MyPlate is described as a helpful tool that “illustrates the five food groups that are the building blocks for a healthy diet using a familiar image—a place setting for a meal” and recommends that our plate be composed of half fruits and vegetables, with the other half grains (mostly whole grains) and protein (mostly lean) with a serving of dairy on the side. However, Americans report that their plate looks a little different (see below). Americans are going heavier on protein and vegetables but limiting grains. 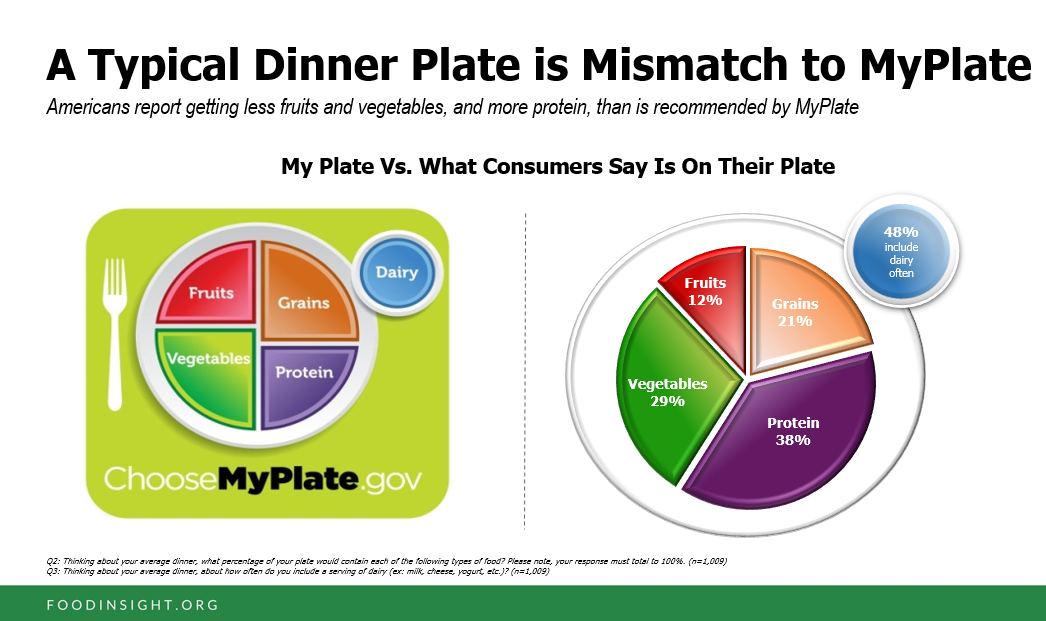 All this diet talk can get overwhelming, and there’s research illustrating that diets might not be the best option for you. What may work better is learning more about mindful and intuitive eating, which both focus on trusting your body to tell you how much and how often to eat.

You might think that means that you overeat all the time, but it’s not true! Research shows that intuitive eaters have lower BMIs and a better psychological relationship with food. While only 26 percent of people surveyed were familiar with intuitive eating, 55 percent of respondents were interested in learning more about it.

As a Registered Dietitian, I want to be clear on one thing: You do not have to be on a strict diet (unless medically necessary) to reach your health and fitness goals. Our overall well-being comprises physical, mental and emotional health, and stress related to food choices only makes it harder to make improvements.

Our culture’s food landscape is clearly still confusing and complex, with most Americans not knowing about the Dietary Guidelines for Americans MyPlate graphic—the very thing that is meant to simplify all the guessing. If you’re new to ditching diets, check out these resources or consider trying to build a few meals each week using MyPlate as a model.