From snacking to sleeping to lemon juice, it seems like everything is supposed to ‘jumpstart your metabolism.’ So what’s real? We check out the biggest myths, and see what science has to say. 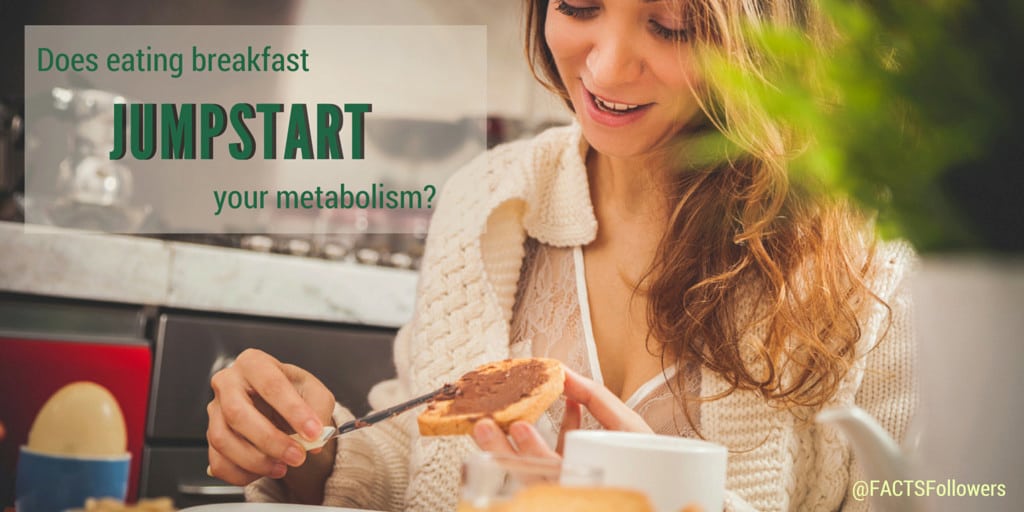 There are many benefits to breakfast. It can provide vital nutrients and improve school performance – and of course, there’s bacon (enough said!). But kicking your metabolism into overdrive is not one of them. The concept that your metabolism needs a ‘boost’ from food right when you wake up is completely unfounded.

In fact, this 16-week study showed that, regardless of whether subjects ate or skipped breakfast, their metabolism was exactly the same at the end of the study as it was on Day 1. There was no difference in calories burned between the two groups, nor was there any change within each group over the 16 weeks. Body fat percentage, lean body mass, waist circumference, and BMI also remained very similar between the two groups.

In fact, the breakfast eaters appeared to eat significantly more calories throughout the day. They ate 2,730 calories on average compared to 2,191 in the breakfast skippers, despite being of similar weight and statures. This surge in calorie count was balanced by a proportional increase in self-reported physical activity, which explains the lack of weight gain in the breakfast eaters’ group. So while eating breakfast may not help your body burn more calories passively, it could give you the energy to hit the gym in the morning.

The idea is simple: whenever we eat food, our body has to burn calories in order to break the food down and absorb the nutrients. If we were constantly eating, then couldn’t our bodies constantly be burning calories? If we ate six meals a day, then technically we would burn twice as many calories as if we eat only three meals, right?

In reality, it is not quite this simple. The thermic effect of food (TEF) is the energy we expend to process, use, and store the nutrients in our meals. However, the temporary boost in our metabolic rates is directly proportional to how much and what types of foods we eat. So those six small meals slightly increase your metabolism six times over the course of the day, but three larger meals would provide three proportionally larger boosts. That means the same amount of calories have been burned at the end of the day.

A meta-analysis of studies on metabolism came to the same conclusion: There is no evidence supporting differences in metabolism or weight loss based on meal size and frequency.

However, in the grand scheme of things, relying on TEF to help us lose weight isn’t a very smart choice anyway, as it accounts for roughly 10 percent of all calories burned. If you find eating more frequent meals helps you avoid overeating and stay within your calorie budget, go for it – but it won’t magically make you burn calories faster.

Myth #3: Certain foods can fire up your metabolism.

While so-called health gurus and diet supplement infomercials promote the idea of a ‘magic weight loss pill,’ the truth is that there is no substitute for a balanced lifestyle. The largest culprits in these miracle claims? Green tea, capsaicin, and lemon juice.

Myth #4: Don’t eat after a certain time of night or before you go to bed.

As far as metabolism myths go, this seems like a fairly reasonable one at first glance. We lie in bed without moving much when we sleep, so it stands to reason that we don’t burn many calories during that time. If we eat right before sleeping, wouldn’t we exacerbate the problem further, storing that food as fat instead powering our daily activities?

There are two issues with this premise. First, our metabolisms do not slow down to a crawl, even when we are sleeping. Our bodies are still quite active at night, keeping us functional and healthy through simple processes like breathing and heartbeat. This study shows that metabolism actually increases during sleep in leaner participants, while slowing down in obese participants.

Secondly, our bodies are in a constant state of flux when it comes to burning or storing energy. Foods that we eat are not converted into energy or stored as fat immediately. Our bodies are constantly switching between anabolism (building) and catabolism (breaking down). They’re pulling energy from stores when needed and refilling the stores constantly.  In short, having a late dinner or snack at night won’t hurt you at all if you stick to eating within your caloric limits.

“Oh my gosh, she’s so skinny! Her metabolism must be working overtime.”

“I can’t lose weight because my metabolism is just naturally slow.”

These are not uncommon phrases to hear at the office, gym, and especially Thanksgiving dinner. The truth of the matter is that there is very little variation in how many calories we burn when we take both lean mass and body fat into consideration.

A study published in Nature found that of the 35 obese and 28 normal-weight participants, the obese subjects on average had proportionally higher metabolisms. The amount of calories burned daily was most closely related to an individual’s lean body mass, which includes muscles, bones, and organs. So chances are, the more you weigh, the higher your metabolism actually is!

In summary, your metabolism functions fairly consistently on a day-to-day basis. Our bodies are constantly breaking down and storing nutrients. The time of day that you eat has relatively little effect on your body’s overall metabolism, so feel free to have a late dinner or bedtime snack as long as you stay within your daily calorie budget.

The biggest way we can influence how many calories we burn and how well we manage our weight is through physical activity. By dispelling these myths and having a basic grasp of our body’s inner workings, we’re better able to manage our own health and well-being.

This article was written by David Hu and reviewed by Kris Sollid, RD.