Price Approaches Taste as Top Influencer for Americans When Purchasing Foods & Beverages
Yet, in a Down Economy, Health is Still Important to Two-Thirds of Americans 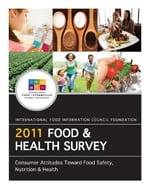 The 2011 Food & Health Survey: Consumer Attitudes Toward Food Safety, Nutrition & Health, commissioned by the International Food Information Council Foundation, is the sixth annual national quantitative study designed to gain insights from Americans on important food safety, nutrition, and health-related topics. The research provides the opportunity to gain insight on how Americans view their own diets, their efforts to improve them, how they balance diet and exercise, and their actions when it comes to food safety practices.

Although taste still prevails as the number-one motivator for food and beverage selections in general (87 percent) and in restaurants (69 percent; new to the 2011 Survey), in 2011 Americans are evaluating their food choices with a more critical eye, taking into consideration where their food comes from; how it was produced; its safety and reliability; food’s overall healthfulness; and its cost.

As the US economy sputters, more Americans report that the price of food is a significant factor in how they are making food purchasing decisions. Seventy-nine percent of consumers say price impacts their decision when deciding which foods and beverages to purchase—a six percent increase from 2010 and a noteworthy 15 percent increase since 2006. Sixty-one percent of Americans also state that price drives their menu decisions at restaurants.

Consumers are receiving more information than ever about food, health, nutrition, and food safety. Impacting their decision-making process and beliefs about foods, the food and food safety environments have changed significantly in the past 12 months, with, for example, the release of the 2010 Dietary Guidelines for Americans and new food safety legislation. In this environment of increasing food and health information, Americans perceive themselves to be more healthful than in 2010.

Consumers want their food to be more than tasty and affordable; they want safe and nutritious foods too.

This Survey offers the important voice and insights of the consumer for health professionals, government officials, educators, and other interested individuals who seek to improve the lives of Americans.

The following are key findings from the 2011 Survey.

Overall Health Status: Compared to previous years, more Americans (approximately half) perceive their overall diet as “somewhat” healthful. At the same time, while a majority of Americans are still making changes in their diet, fewer Americans report making dietary changes in 2010 (59 percent compared to 64 percent in 2010). Of the Americans who have made dietary changes, Americans continue to turn to family and friends for support (36 percent). But interestingly, just as many say that they have not turned to any resource in order to help them achieve dietary changes (36 percent).

Weight Management: Significantly fewer Americans are concerned with their weight status this year. Still, the majority (69 percent) of Americans is trying to lose or maintain their weight and cite these as strong factors influencing their decision to make dietary changes and remain physically active. Specifically, 56 percent of Americans report weight loss as a top driver for improving the healthfulness of their diet, and 20 percent report improving their diet to maintain weight. Although a significant decrease from last year, losing or maintaining weight remains the top motivator (25 percent) for Americans who are physically active. Improvement in physical appearance (51 percent) and increased self-esteem (43 percent) and energy (43 percent), followed by improvement in health /overall well-being (41 percent), are top motivators for those who are trying to lose or maintain weight.

Calories and Energy Balance: Similar to last year, few Americans (9 percent) can accurately estimate the number of calories they should consume in a day for a person their age, height, weight, and physical activity. Additionally, more than half of Americans are unable to provide an estimate of how many calories they burn in a day (60 percent) or offer inaccurate estimates (24 percent say 1000 calories or less).

When it comes to calories consumed versus calories burned, most Americans do not regularly keep track and 69 percent do not make an effort to balance the two – a significant increase from 2010. Forty percent of Americans are most likely to agree that calorie imbalance (more in vs. out) leads to weight gain.

Among those Americans who report currently trying to lose or maintain weight, the vast majority believe both physical activity and monitoring food and beverage consumption are equally important in weight management (70 percent). However, only 54 percent report actually implementing both strategies in an effort to manage their weight.

About four in 10 Americans (43 percent) believe that advances in modern food technology have provided or will provide future benefits for themselves and their families. Of those, about one-quarter say the greatest benefits are the ability to “produce more food using less land” (29 percent) and “preserving our natural resources” (25 percent). Furthermore, six in 10 (61 percent) Americans believe they have benefitted from modern food production and processing, with “improved food safety” (29 percent) and “food that stays fresher longer” (22 percent) emerging as the top benefits of modern food production and processing.

Fortified Foods & Foods with Added Benefits: Nine in 10 Americans (88 percent) believe that fortified foods and foods with added benefit have at least some impact on overall health. Four out of five Americans purchase a variety of foods and beverages, including milk, juices, eggs, yogurts, and cereal specifically because of an added benefit or fortification.

Sodium: Despite significant attention focused on sodium in the 2010 Dietary Guidelines for Americans, other sodium-reduction initiatives, and the media, Americans’ concern about sodium remains stable. Equal to 2010, a little more than half of Americans (53 percent) say they are very or somewhat concerned about their sodium intake. Six in 10 Americans regularly purchase reduced/lower sodium foods. Approximately half of all Americans say they would be interested in learning more about sodium, including the amount of sodium they should consume; how sodium can impact health; which foods and beverages contribute the most and least amounts of sodium to the overall diet; and what types of people should be concerned with sodium intake. This level of interest is consistent with 2010 responses.

Caffeine: As in 2010, the majority of Americans (69 percent) say they consume caffeine in moderation. More than half of Americans agree that caffeine has the ability to help you wake up/stay awake, and more than four in ten agree that caffeine can help increase energy (46 percent) and can be part of an overall healthful diet (42 percent). More than six in 10 Americans think children (64 percent) and pregnant or lactating women (62 percent) should limit their caffeine intake.

Food Safety: One-half (51 percent) of Americans are confident in the safety of the U.S. food supply. However, while most Americans are confident and understand food safety is a shared responsibility, Americans are falling behind in regularly performing safe food handling practices. Although eight in 10 Americans report following safe food handling practices, the numbers continue to decline for washing hands with soap and water before handling food (79 percent in 2011; 89 percent in 2010; 92 percent in 2008). Also declining, fewer Americans report washing cutting boards with soap and water (71 percent in 2010; 84 percent in 2008), In addition, half of Americans (50 percent) do not use a food thermometer and 30 percent indicate nothing would encourage them to use a food thermometer. Foodborne illness from bacteria remains the most important food safety issue (50 percent), but the Survey indicated that imported foods (15 percent) and food allergens (8 percent) are also important food safety issues.

Growing Interest in Imported Foods: Sixty-one percent of Americans believe that imported food is less safe than foods produced in the U.S., citing less regulation as the top reason.

Information Sources and Influences: Americans increasingly say that they would rather hear what to eat (63 percent) instead of what not to eat. This interest in positive messaging rose seven percent since 2009 when the Survey last polled Americans on this sentiment.

Food Labeling: Similar to previous years, Americans say they are actively using the Nutrition Facts panel on food and beverage packages along with the expiration date, brand name and package size. Even though less than 20 percent of Americans report using the country of origin labeling, health symbol, or allergen labeling, the use has risen significantly over the past two years. When asked which specific elements Americans use on the Nutrition Facts panel, calories, fat, sodium, and sugars top the list. When asked what specific ingredients Americans are looking for in the ingredients list on food and beverage packages, about two-thirds of Americans list sodium/salt (65 percent), fat/oil (64 percent), and sugar content (60 percent). Additionally, Americans continue to increasingly look for vitamin and mineral content (48 percent) as well.

Purchasing Influences: While taste prevails and continues to be the main driver of purchasing foods and beverages in 2011 (87 percent), the price of food is increasingly becoming important for Americans consumers. In 2011, a majority of Americans (79 percent) says price impacts their decision when deciding which foods and beverages to purchase, a six percent increase from 2010 and a noteworthy 15 percent increase since 2006. While healthfulness (66 percent), convenience (58 percent), and sustainability (52 percent, new to the 2011 Survey) play roles in consumer decision-making, no other motivator has risen at the same rate as price over the past five years.

Restaurants & Eating Occasions: Taste and price are the most important factors for Americans when deciding what to order in a restaurant. Seven in 10 Americans believe that calories on menus would help them in some way with selecting foods that are more healthful as well as make informed decisions about their diet. However, when thinking about the overall healthfulness of food in restaurants, Americans believe the total nutritional value is most important. Calories among other nutrient components were equally rated as important. When it comes to families eating together, regardless of setting, on average Americans eat about eight meals (7.91 mean meals a week) with their family each week, approximately one meal per day.

Our Mission
The International Food Information Council Foundation is dedicated to the mission of effectively communicating science-based information on health, food safety and nutrition for the public good.
Additional information on the Foundation is available on the “About” section of our Web site: www.foodinsight.org.